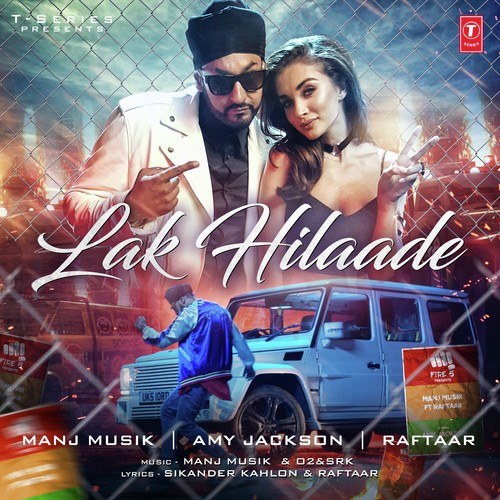 Manj Musik has been an integral figure within the music industry, providing hit tracks and anthems in Bhangra and Bollywood, with his music career spanning over an incredible fifteen years. Manj’s hard work and dedication has allowed him to progress and solidify himself as a household name within Bhangra and Bollywood, introducing a number of acts to the music scene including wife Nindy Kaur and rapper Raftaar, and collaborating with Hollywood and Bollywood A-Listers such as Akshay Kumar, Snoop Dogg and Ludacris – with his musical legacy only yet to increase with this upcoming and ground-breaking news.

In a short interview with Manj, he reveals the thought process behind the single and reveals exclusive news on his next album.

1. How did the track come about?

“I was sitting in a hotel room watching MTV india and on came a ragga song……straight away i thought…dammn nobody done a dancehall type of punjabi hindi track….why not try. So i thought of this hook LAK HILAADE in a computer voice and started to build the beat. When Raftaar and Nindy came in, I showed them the beat and hook and they went crazy saying this is nuts….raftaar actually said nobody done this in India paji….we gotta make it proper with a sick video. So I finished the beat practically on the plane heading back home, at the same time I sent the beat to Sikander and said bro what do you think….he said DAAMMNN PAAJ I got some sick idea for this beat so send me a melody paaj. After sending the melody…he put the lyrics down and I loved them….I switched up a few lines but at the end came out sick. Then Raftaar came in hard on the rap and finally recorded Amy on the punjabi hookline. It’s the first time she tried singing punjabi and actually recording. It wasn’t amazing of course but she did really well….all I did was just layer with backing it a lil with Nindys voice slightly behind…they actually sound very alike lol.

2. What influence did O2&SRK have on your new single and what is the overall sound/vibe of the sound like?

“I was not 100% happy with the final track, so I sent over the track to my new signing O2&SRK, these two young kids are massively talented and have a crazy ear. These boys are gonna be huge in the future…mark my words. So they added some extra sounds and hits which really gave it that bashment dancehall feel I was looking for. Kind of the same way me and Kuly paaj used to work and made all those hits….I would start then send him, he would add and send back to me and vice versa.”

3. You have experimented with lots of different genres and styles of music, would you ever consider doing a Desi track?

“Funny enough….I have a smash hit desi song ready steady…..I know I’m singing quite a few songs myself but when it comes to desi….I know where I stand…..using some crazy vocalists from Punjab and adding my crazy music is what people always wanted as RDB and I’m doing it again. Just get ready for a flood of desi tracks with a MANJ MUSIK twist coming…all vocals by some of the biggest singers in the industry today. ALBUM IS CALLED – Punjabi BILLBOARD.”

4. What was it like to work alongside Amy Jackson and how did you go onto collaborate with her?

She’s a diamond…and from the UK so we blended so well on set and recording. She is such a bubbly person and so much fun to have around. ZERO EGO and pure work horse…she is a grafter. We sat on sets of Singh is Bling where we met and then after that we stayed in touch and hey presto….LAK HILAADE!”

Manj also revealed exclusive news to BritAsia TV regarding his next album and his most recent project with Nindy Kaur.

I got more bollywood songs coming out on movies as per usual…but really pushing my independent singles too now. I took the back seat on Punjab…but get ready….PUNJABI BILLBOARD is coming feat all your fav Punjab artists!

The song with Sunny Leone is actually NINDY KAUR’s single….it was supposed to be her single but she was happy enough to give it to Sunny for her release. Me and Raftaar shot the video in Mumbai with her. Vocally its Nindy KAUR and me feat Raftaar. It is one song you will not stop singing…that’s guaranteed!! NINDY KAUR IS BACK and in full throttle!
The team at BritAsiaTV cannot wait to hear the upcoming album and more new music from Manj! Check out the single to ‘Lak Hilaade’ featuring Amy Jackson as well as the new single ‘Mar Gaye’ featuring Sunny Leone below!