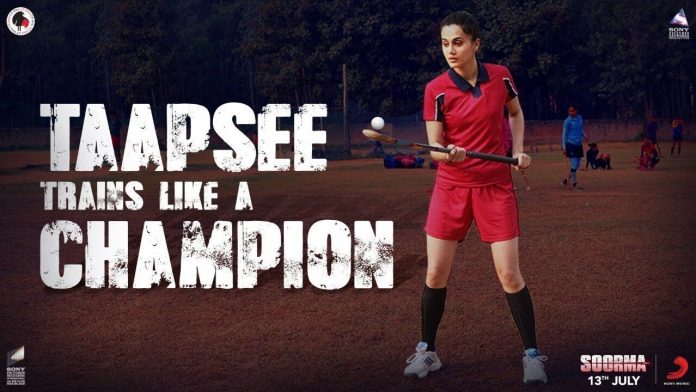 Taapsee Pannu will soon be taking to the silver screen as Harpreet in the upcoming movie ‘Soorma’, playing the lead opposite to Punjabi superstar Diljit Dosanjh in the biopic based on the Indian hockey player Sandeep Singh’s life.

The actress has given her fans a sneak peak to the hard work that put into the role, by sharing a two and a half minute video which follows Taapsee’s training and following a routine set by former Indian hockey captain Sandeep Singh.  In the video, we see her learning the basic nuances and etiquette of hockey for several weeks to make sure her moves look good before shooting the film.

Taaosee applauded Sandeep for his patience and approach whilst teaching the actress the sport, which she had never played before. She also posted on her social media saying that it was a dream come true to learn and play the sport of hockey, as her father was a hockey player back in his college days.

The hockey based movie is due to be released on the 13th July.