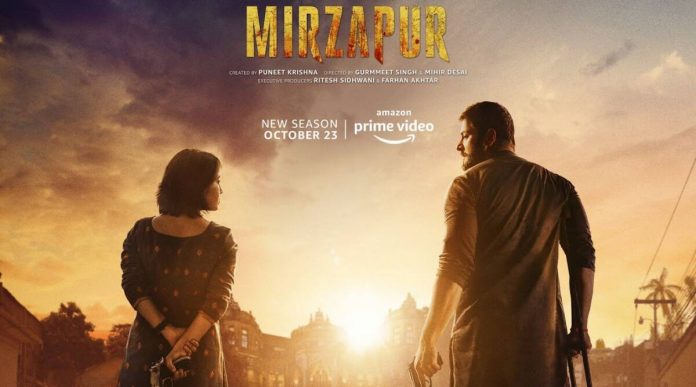 The second season of Mirzapur has been eagerly awaited by fans, especially as the story was left at a crucial juncture for the Season 1 finale.

The second season of Mirzapur is the most anticipated release of 2020. The popular series will be returning to Amazon Prime Video on 23 October 2020 and will be available for viewers to watch in over 200 countries and territories worldwide.

Since Amazon Prime made the announcement, fans have been waiting with bated breath for the continuation.

Until the season premier however, fans can whet their appetite with the latest poster for Season 2, which features Ali Fazal’s Guddu and Shweta Tripathi’s Golu holding guns. We can surmise that that the two characters are out to take revenge from Divyendu Sharma’s Munna after the death of Vikrant Massey’s Bablu and Shriya Pilgaonkar’s Sweety in Season 1’s finale.

Check it out here 👇.

The second season is directed by Gurmmeet Singh and Mihir Desai. It is created and produced by Excel Media and Entertainment and will launch exclusively on Amazon Prime Video.

Amazon Prime offers a 30-day free trial of the streaming service and after the trial is complete, you can subscribe for £7.99 per month.

The entire first season of Mirzapur is available to watch on Amazon Prime Video now.