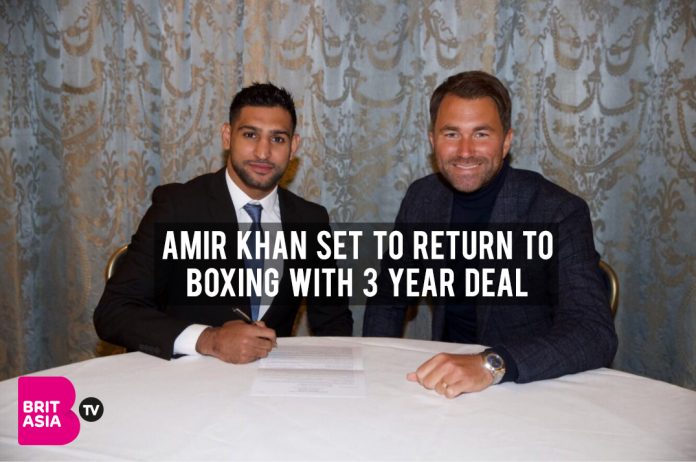 Amir Khan has announced that he will be returning to the Boxing Ring, after signing a three-fight deal with Matchroom and its promoter Eddie Hearn.

This will be Khan’s first match, that will take place for the first time in 7 years, in the UK.

He will face three fights, with the first fight set to take place on the 21st April 2018, at the Echo Arena in Liverpool.

Back in business. I will fight on April 21st in Liverpool pic.twitter.com/UqgmCNwKmb

The Boxing star announced the big news at a special London press conference on 10th January 2018.

We don’t know who will be Amir’s first opponent in April, but many are hoping he will fight against his long-term rival, Kell Brook.

Delighted to confirm I’ve signed a three-fight deal with @EddieHearn & @MatchroomBoxing. I’ll be fighting live on @SkySportsBoxing on April 21st in Liverpool. Can’t tell you how excited I am to fight in the UK once again. #BackToBusiness pic.twitter.com/Mx41hcAbcW

Amir caused a stir on social media, and not with news about his wife this time, but his career by announcing a press conference.

He told his followers, that he would talk about his career and everything else.

BIG NEWS!
Press conference at 12pm tomorrow in London.
Major announcement regarding my future and return to the ring!
Stay tuned… pic.twitter.com/oqoWHrq8ln

Fans will be excited to see the British Asian back in the ring, fit and ready to fight. His last match was back in May 2016, where we saw the boxing star lose to Saul ‘Canelo’ Alvarez.

Even though we haven’t seen Khan in the ring, he was a contestant in ITV’S show I’m A Celebrity, where we saw another side to the sportsman, and made headlines with Strawberry-gate.

Unfortunately, he didn’t go on to win the coveted King of the Jungle crown, but instead won over a new audience and extended his fan base.

With a baby on the way, and Khan stepping back in to the ring, there is no doubt he will be making more headlines this year.