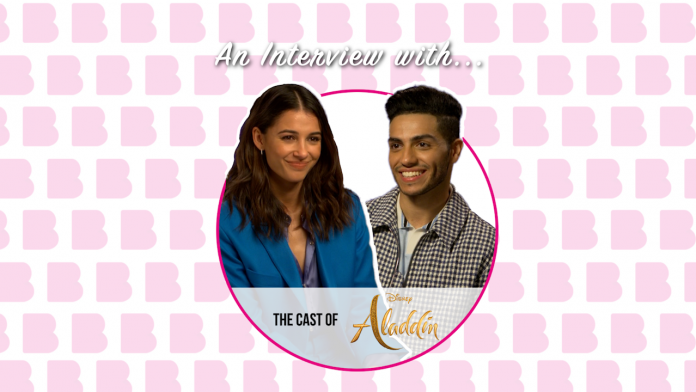 We caught up with lead actors Naomi Scott and Mena Massoud from the upcoming Disney movie ‘Aladdin’.

Last week marked the European premiere of the upcoming Disney movie ‘Aladdin’. It was a star-studded affair with actors from the movie walking on the magic carpet. Will Smith joined his co-stars Naomi Scott and Mena Massoud, along with a host of other celebrities gracing the iconic Leicester Square screening.

It was good to be back in the place where it all started. Thank you London, your energy was amazing! #Aladdin

Our presenter Anila Chowdhry had a chance to sit down with Naomi and Mena after the glitzy premiere took place.

British actress Naomi Scott nabbed the role of Princess Jasmine, a role thousands of girls have dreamed of playing. Being half white and half Indian, she always felt that deep connection to the Princess. Her dreams came true when she was casted to play the iconic role.

Speaking on which part of the film she was excited to re-enact, Naomi said: “A Whole New World is very iconic, but I was excited to play the arc of her finding a voice and fighting what she believes in.”

The actress faced a lot of backlash when she was chosen to play the Princess, but Scott told us that she focused on the character and made sure she did a good job representing her.

Mena Massoud was picked for the exciting role of Aladdin, another role many people around the world would’ve loved to play. He’s described as strikingly like the character due to his look and personality.

He told Anila he wanted to bring his own personality through to the character, and fans will get a bit of the Mena experience through Aladdin. Mena also decided against watching the original version of the movie as he wanted to remove himself from labels and mannerisms. He was determined to make it his own and focused on the bigger picture of the film and what story he wanted to portray.

Legendary actor Will Smith is also in the Live adaption and plays the comedic role of ‘Genie’. The Disney movie hits the big screen on 24th May 2019.