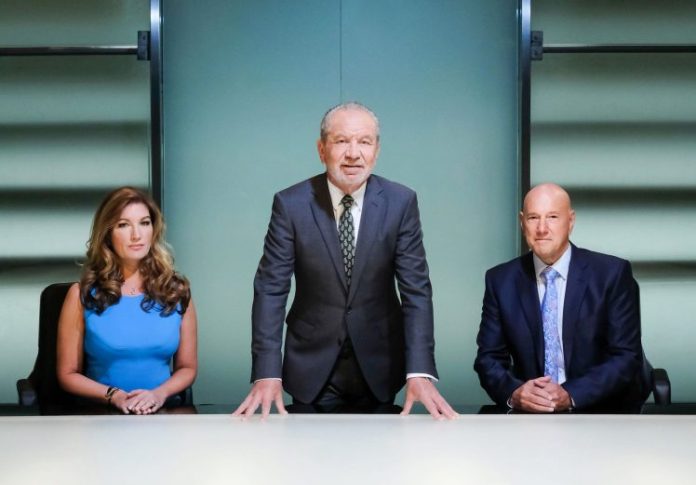 The Apprentice is back on our TV screens this Wednesday, where candidates are battling it out for Lord Sugar’s approval and his money.

The Apprentice is a BBC programme that aims to find a new apprentice for billionaire businessman Lord Alan Sugar.

Each week, a new task is set for the contestants that tests all their business skills, but also shows off their competitiveness amongst them all.

The Apprentice will return on October 4th at 9pm on BBC One.

Andrew is a 26-year-old who comes from Cheshire, and is a project engineer in the aerospace industry. He hates people who don’t pull their weight, and thinks he has the confidence to make it far in the competition.

36-year-old Anisa owns a PR fashion agency and lives in Surrey. She hates it when people are slow to grasp concepts. She says ~I’ve got everything Lord Sugar needs in a business partner. I’m passionate, dynamic and persistent- he’ll love that.”

Bushra is a 34-year-old, who is an owner and designer of her own modest fashion label, creating luxury apparel for Muslim women.

She is inspired by Coco Chanel, and believes her skills and determination are all she needs to succeed in The Apprentice, but is known to be pushy to get what she wants.

24-year-old Management Consultant Charles comes from Manchester. He is involved in many businesses from comparison websites, to a watch trading company. He believes his passion and drive will make him the best candidate.

Kent based businessman Danny, owns an online retail store. He believes his best quality is his loyalty, but warns that he’s not ‘a doormat’, and his trust shouldn’t be taken for granted.

Florist chain owner Elizabeth McKenna is 39-years-old and lives in Nottinghamshire. She says she’s “slightly bonkers”, and is a huge animal lover. She thinks she could be a loose cannon for Lord Sugar to get to grips with.

London boy Elliot is a 31-year-old Legal firm owner, who used to work in the office of David Cameron before he was Prime Minister, is also known as ‘Tory Boy’ to his mates.

Watford boy Harrison started his own landscaping business aged 19, and is also working on many business ventures including property development, a healthy eating brand and a luxury streetwear brand.

PR and Marketing Manager Jade English, is a 25-year-old from Manchester. Jade says she knows everything about social media and prides herself on her creativity and passion.

She says: “I’m extremely emotionally intelligent and able to get the best out of people. I am a brilliant negotiator and I’m not all talk – I put every weird idea into action and gets results.”

26-year-old James runs his own IT recruitment business and believes his drive and ambition area his best qualities. James also like to think of himself as ‘Del Boy’.

Business analyst Jeff, who comes from London, is a semi-pro hip-hop dancer. He’s been a fan of the show since his teens, and thinks he can make it as a businessman.

Digital marketing manager Joanna is a 23-year-old from Manchester. She says the first thing she notices about people are their clothes.

She says: “My demeanour can be related to the saying ‘Don’t wake a sleeping lion’ – If you underestimate me I might just bite.”

Bolton based Michaela owns a construction business, and thinks she’s pretty easy going but with a short fuse.

Working as a woman in a very male-dominated industry, she says she despises men who talk down to her.

Digital Product Consultant Ross, think he’s his own role model, and prefers to forge his own path rather than copy others.

He says: “I’m usually the smartest person in any room and I’ll make sure people know that.”

London based event company owner Sajun, claims that the majority of candidates will be using them as their role model after the series, and believes his greatest quality is his ability to read people.

He says: “I am like a Chinese dish – potent, deliciously driven, full of flavour and I sure do sizzle.”

Sarah Jayne owns a clothing company in Derbyshire. She says she is strong-willed and self-motivated, and says she’ll never let her guard down.

Owner of a confectionery company Sarah, says she’s a great salesperson. She considers herself to be a “people person”, and doesn’t think she needs tactics to win.

34-year-old owns and runs a wedding service company for couples in the UK.

She considers herself to be very direct, but thinks people sometimes take her honesty the wrong way.

‘Some people say I’m dangerous to be around, so if you don’t get too close you’ll be OK,’ she said.