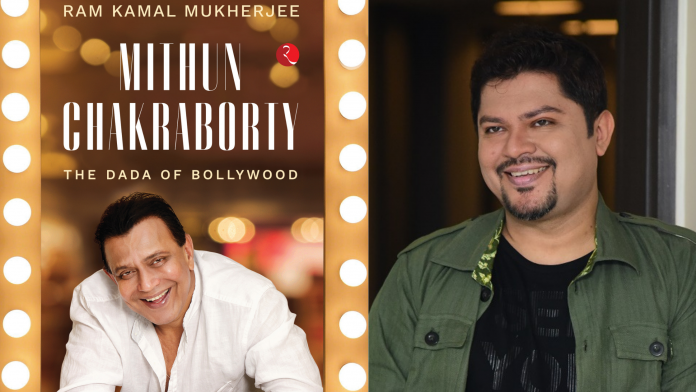 Author and acclaimed filmmaker Ram Kamal Mukherjee has released his latest biography that chronicles the life and legacy of Bollywood icon, Mithun Chakraborty.

The author’s latest publication, Mithun Chakraborty: The Dada of Bollywood, was one year and a few months in the making.

In an interview published by Times of India, Kamal Mukherjee said: “Dada (Mithun) didn’t want to write his autobiography. I was very keen on telling his story. There are few books available on Mithun, but mostly in Bengali. He being a national icon, a megastar and legend I felt that he deserved a book.”

The idea of writing a book on the Disco Dancer came to Kamal Mukherjee’s mind after finishing Hema Malini’s authorised biography.

“I went to promote the book at one of Mithun da’s dance reality shows. That’s when actually Hemaji asked Mithun why doesn’t he tell his story. Dada being extremely shy, he jumped out of his chair, ‘Na baba na!’ To that Hemaji jokingly said, you don’t write [the book] — let Ram tell your story. Dada looked at me and we smiled,” recalled Kamal Mukherjee.

The Mithun Chakraborty biopic chronicles the entire journey of the actor in front of the camera and behind the camera. Studied with anecdotes and interviews from colleagues, friends, family members and the legend himself, the book is a consummate account of Chakraborty’s life and legacy.

There are many facets in Mithun’s life that would inspire, said the author. The “struggle” that he went through as an outsider “should be a lesson for all newcomers” who dream to make it big in tinsel town.

“During lockdown, when Sushant Singh Rajput’s incident happened, it made me realize that there are many such outsiders who are constantly fighting to survive in Mumbai. Mithun da in those days, faced bigger challenges, financially and physically, he was not at the right side. But he didn’t give up. His story will inspire many new talents to fight and survive.

“If you are talented then no one can stop you. Mithun faced roadblocks in every step, from the biggest of the stars to the biggest directors and producers didn’t want to cast him. But he created his own fanbase. I am sure that this book will inspire many,” added Kamal Mukherjee.

Mithun Chakraborty: The Dada of Bollywood is available now.