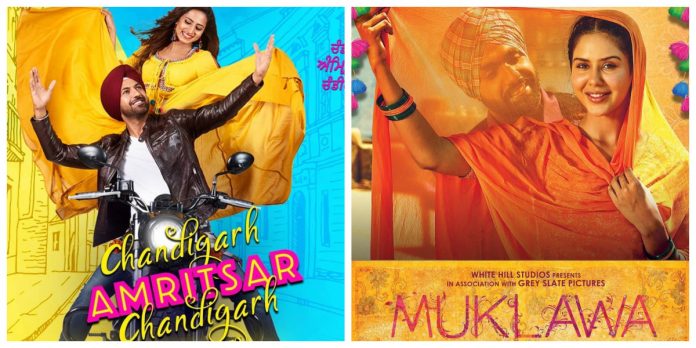 Punjabi films ‘Muklawa’ and Chandigarh Amritsar Chandigarh’ are two of the most anticipated flicks of the year, which both include two strong on screen couples.

‘Muklawa’ will be starring the popular on screen duo, Ammy Virk and Sonam Bajwa, whilst ‘Chandigarh Amritsar Chandigarh’, features the fresh pairing of Gippy Grewal and Sargun Mehta.

We recently saw Ammy Virk and Sargun Mehta grace our screens in ‘Qismat’, which became a huge hit. Gippy Grewal has also been hot in the scene, and has been working hard to release back to back flicks. He successfully picked up five Punjabi Film Awards for ‘Carry on Jatta 2’, which also starred Sonam Bajwa.

‘Muklawa’ is a Punjabi traditional where the bride visits her maternal home after the wedding and is given gifts and clothes when she returns to her in-laws the following day. This is also called Phera Pana. However, since the film is a period drama and is set in rural Punjab, the custom extends to a whole year.

‘Chandigarh Amritsar Chandigarh’ is another rom com but this time we see the main characters debating on the city they’re from. We’ll see Gippy Grewal and Sargun Mehta develop a love/hate relationship with each other. The public will have a chance to see the popular actors working with each other for the first time.

These are the four biggest Punjabi actors in the industry, and it will be interesting to see the friendship groups going head to head on 24thMay.