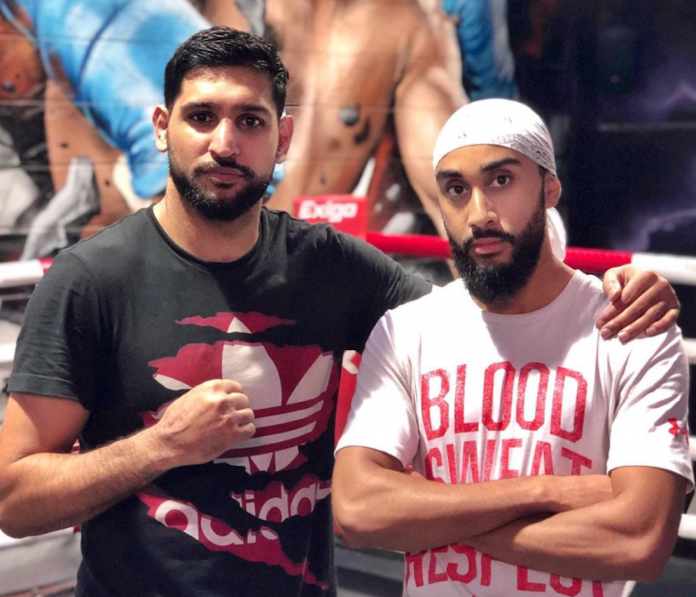 After announcing his management deal with Amir Khan in March, BritAsia TV caught up with boxer Tal Singh – who aims to become the first Sikh world champion – to discuss what it means to have the Bolton boxer backing him, what to expect in 2021 and more.

Khan is set to manage the 26-year-old England amateur champion, and is negotiating terms with various promoters about launching Singh’s arrival in the professional ranks in 2021.

The light-flyweight has trained at Khan’s gym since last Spring, impressing the former world title holder, who announced Singh as his first-ever signing in March.

In our exclusive Q&A, Singh tell us what this will mean for the Sikh community, how the deal was made and what to look forward this year.

Priyanca: How does it feel having Amir Khan backing you to become the first ever Sikh world champion boxer?

Tal: It’s amazing to have Amir with me on my journey, it gives me a lot of confidence knowing I have a lot of experience and knowledge behind me in the ring and outside of the ring. I feel that the amount of belief we have in each other will enable us to work synergistically and make this a really special journey to follow.

Priyanca: How did the opportunity come to fruition and have you been working toward this for a while?

Tal: Once the pandemic had kicked in and began to stall my progression, I sent Amir a text as I was back in Liverpool and needed somewhere to continue my training. I’ve known Amir personally for quite some time but I never thought he would be managing me one day. I spoke with Amir if it was possible to use his private gym and he told me he was currently in training himself and to join him in his sessions.

Priyanca: How did you feel after signing the deal?

Tal: I was excited, more so because I’m his first and only fighter. It is known that many professional boxers from across the world have approached him in the past for these kinds of opportunities and he specifically chose to work with me.

Priyanca: What has Amir Khan said about working with you to help break down the barriers for South Asians?

Tal: It’s a pretty similar situation as to what Amir has achieved when he became the first-ever British-Pakistani world champion and opened the doors for the Muslim community in boxing.

Priyanca: What does this mean for the Sikh community specifically?

Tal: It’s a good thing, the Sikh people are exceptionally well known for being brave and valiant people, our gurus themselves were great examples of this and practiced a variety of martial arts and encouraged us to do so too. Hopefully my journey can be seen as an inspiration to encourage this in the community further.

Priyanca: What are you doing at the moment and what can we expect in 2021?

Tal: Right now I’m keeping myself in the gym twice a day training hard. In 2021, you can expect to see me in the ring, in fights that the people can tune into live on television. There’s a lot going on behind the scenes that is yet to be revealed, so I’m patiently waiting to share this with you all soon.

Priyanca: What’s your message to aspiring young professionals entering the same arena as you?

Tal: I would say this to anyone, regardless of whether they want to become a professional boxer, athlete or excel in an academic field and that is to simply be relentless in your pursuit by working hard, staying disciplined and most of all believing in yourself even when others don’t.

Tal: If I’m honest, I don’t know what I would say. I think everything happens for a reason and is all a part of God’s plan.

Taking to Twitter in March, Khan made the announcement about the management deal and shared a photo of the two shaking hands, symbolising the long term partnership.

Excited to announce that I have signed an exclusive long term advisory/management deal with future boxing champion @tal_singh and will now be looking after Tal’s professional boxing career moving forward. #TalSingh pic.twitter.com/4hZr82SYrL

Khan held world titles in two divisions, including becoming a unified belt holder at 140lbs, and has relished the opportunity to pass on his ring skills.

Singh’s ultimate ambition is a historic world title triumph, but he also wants to inspire more young boxers from the Sikh community.