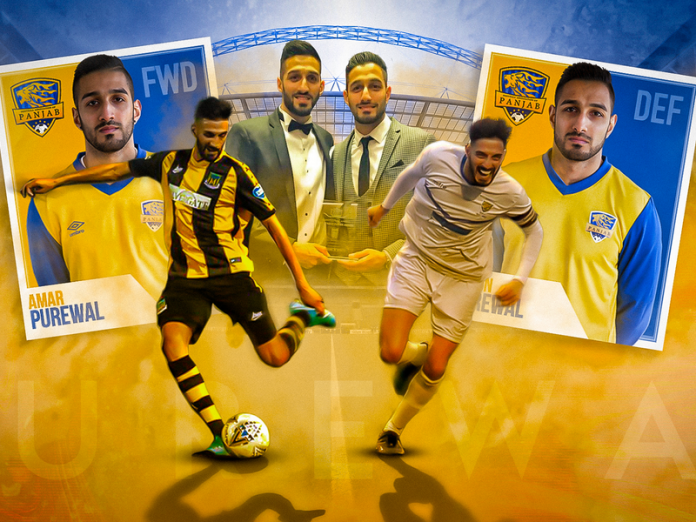 Twins Amar and Arjun Singh Purewal will make history today, as the first British South Asian brothers to play off against each other in a Wembley Cup final.

The Sikh Punjabi twins from Sunderland have played alongside one another for much of their careers. But today (Monday) they will make history — when they play on opposite sides as Amar’s Hebburn Town takes on Arjun’s Consett AFC, in a North-East derby in last season’s rescheduled FA Vase final.

The Purewal brothers are iconic football figures in the North East — having between them played for clubs including Darlington, Durham City, Jarrow and West Auckland.

Though the delayed sibling showdown will be played behind closed doors due to Covid restrictions, Consett defender Arjun and Hebburn forward Amar hope to inspire those watching on television and ‘break barriers’.

Speaking exclusively to Priyanca at BritAsia TV, the twins said they were ‘very proud’ to be be playing at Wembley and ‘thoroughly looking forward’ to the game as it’s a big occasion.

When the brothers found out they would be playing against each other in the FA Vase Final, it came as no surprise once they won the semi-final, but the excitement for Monday’s match has been palpable.

“Obviously once we were both in the semi-final, we knew there was a chance if we both won, we’d be up against each other and once we won our semi final, we found out [Amar’s Hebburn Town] had won too and that was exciting,” Arjun said.

In preparation for the rescheduled game, the twins have been in constant training and have had five weeks to get ready for their historic match.

“We have prepared very well,” he said, adding “[we’ve been] training consistently with the team and playing games which has kept us sharp.”

The reaction from friends and family in the run up to the sibling showdown has been bittersweet.

Arjun told BritAsia TV: “Friends and family have been delighted for us, and at the same time, torn, as they want us both to win but know we are making history.”

He added: “My mum has been fantastic — she has just said enjoy the occasion and make sure you try your best. We think it’s been harder for her than us.”

When asked about MP Tan Dhesi, who described the sporting event as ‘history in the making’, Arjun said “it’s great to hear that from such a prestigious person.” But asked whether Mr Dhesi’s comments puts the pressure on, he answered, “not really”.

“I think we will try and play the game as we always have done — by enjoying it competitively.”

While football remains the most popular participation sport for British South Asians, there is still a stark underrepresentation in professional leagues. Asked whether Monday’s game might contribute to some positive change, Arjun said it is their “hope”.

“We have been described as trailblazers and that name tag makes us proud, as we hope to lead the way for young people and players coming through.”

The brothers hope that being in direct opposition on television will show young British Asians there is a pathway for them in the game.

Their message to aspiring footballers is to be “mentally strong” and “deal with any setback positively”.

Back in their hometown, the brothers run a sports coaching business called ‘AP Coaching’ which operates in infant and primary schools, delivering PE to children from nursery to year

They also deliver school curriculum PE as well as clubs, holiday camps and 1-1 sessions, operating in 10 different schools in the Sunderland area.

Speaking about the future, the twins hope they can develop their success and build on this career milestone, enabling more South Asians to take up the sport.

“I’d like to think we can build on this and carry on being successful with our football. I’d like to see if we could become involved in helping promote football for Asians.”

The 31-year-old twins will become the first British Sikhs to face each other at the national stadium, when Northern League rivals Consett and Hebburn Town meet in today’s FA Vase final today.