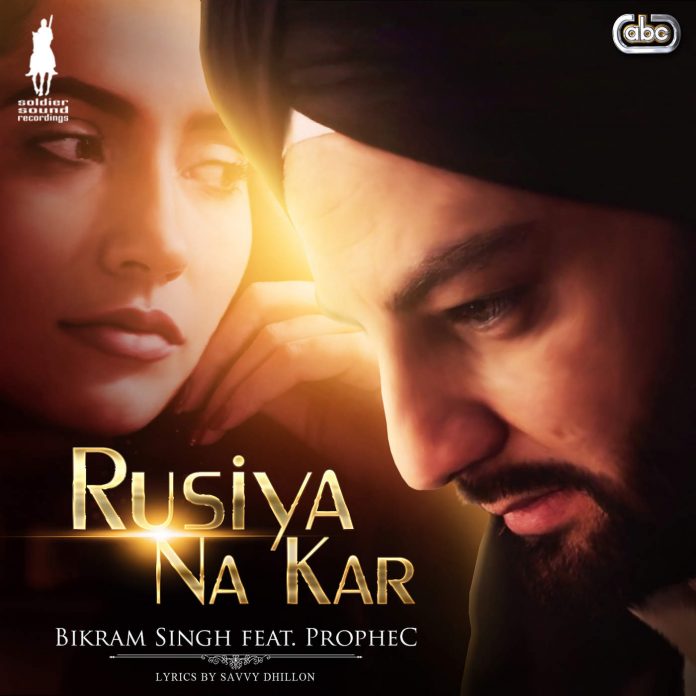 North American singer Bikram Singh has released his first single of 2016 in the form of ‘Rusiya Na Kar’ with music production provided by The PropheC.

Bikram Singh and The PropheC have both been household names within Bhangra – flying the flag for USA and Canada based Bhangra artists. They have both enjoyed commercial success as well, with a number of successful singles, collaborations and projects with various artists across the globe. Bikram Singh has had huge success with his debut album ‘American Jugni’ which featured the hit single ‘Kawan’ featuring Gunjan, which spent several weeks at the very top of the BBC Asian Network charts. Bikram has also had success with tracks such as ‘Tere Nain Nashiley’ featuring Twin Beats, ‘Kawan 2’ featuring Tigerstyle and his most recent track ‘Teri Yaad’ featuring Ishmeet Narula and Epic Bhangra.

The PropheC has been an integral part of the US/Canadian Bhangra scene by producing, vocalling and writing lyrics for numerous Bhangra tracks – and collaborating and unearthing some of Bhangra’s biggest talents. He has collaborated with artists such as Mickey Singh, H Dhami, Fateh, Raxstar and introduced Raashi Sood to the Bhangra industry, a vocalist who most recently debuted in Bollywood.

Speaking to Bikram Singh, working with The PropheC was enjoyable as always.
“PropheC and I released two tracks in the past “Nach Sohniye” and “Jaaniye” We had a great time working on these songs, which were very well received by the audience. We had discussed possibly working on a slow jam, a nice romantic song together some time ago. Eventually, I had the perfect song for us! We discussed it when he came to New York and we had a new song for the audience not long thereafter.

He’s a great artist and a good friend- I have a lot of respect for him as a person and as an artist.

Rusiya Na Kar is about a boy professing his love to his girl when he feels as though things may not be going as they may seem. It is about focusing on things that really matter and not about little things that may end up breaking a long standing bond between them. The message is clear, “without you the entire city seems empty, please don’t let minor things come between us.” As what we have is “stronger than the bickering of everyday life.”

Be sure to check out the track below and stay tuned to BritAsia TV for more music updates!