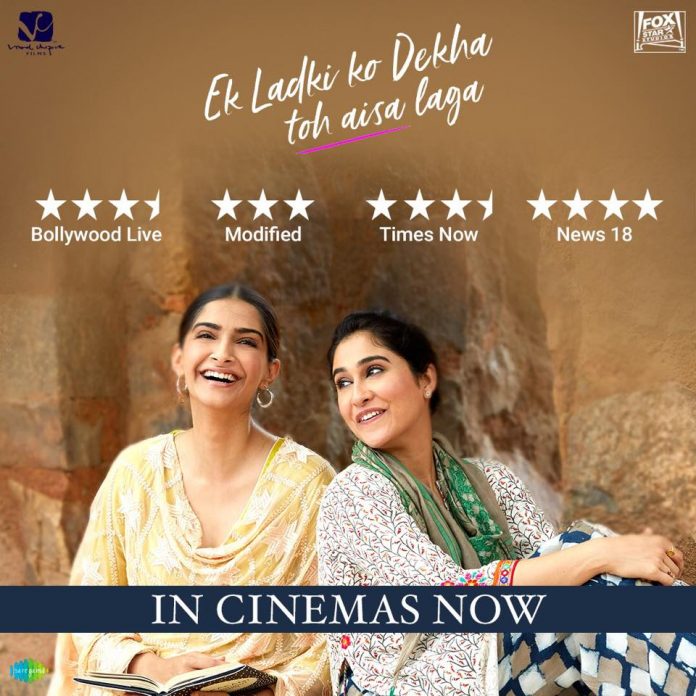 The highly anticipated Bollywood flick, ‘Ek Ladki Ko Dekha’ has released as of February 1st 2019 and Bollywood has gushed their love and support for the film.

The Sonam Kapoor starrer appears to have hit home for many critics and celebrities alike as the film is receiving very positive reactions through social media.

The film is the first time we have seen father-daughter duo on-screen together with many of the Bollywood brigade taking note of their performances.

A wonderful movie that stays with you #EkLadkiKoDekhaTohAisaLaga is both relevant and funny. @sonamakapoor is absolutely lovely and @iam_juhi you cracked me up-we have a cousin who speaks exactly like you do in the movie! Folks go watch it ! pic.twitter.com/RVYgWBTz1a

Sonam Kapoor plays Sweety a young woman of a ‘typical Punjabi household’ of which, her father, Balbir Chaudhary (Anil Kapoor) is the head.

Balbir is seen to be concerned with marrying his daughter off, unaware that she is a lesbian and is in love with a woman.

Kriti Sanon praised the movie for delivering such an important message with such subtlety.

Hats off to the team of #EkLadkiKoDekhaTohAisaLaga for picking up such an important and sensitive topic and showing it so subtly! @sonamakapoor kudos to u👏🏻 @AnilKapoor sir, @iam_juhi mam you guys are fabb and a treat to watch! @RajkummarRao you amaze me every time my friend!❤️🤗

The writers of the film included Gazal Dhaliwal and Shelly Chopra Dhar.

Swara Bhaskar who starred alongside Sonam Kapoor in ‘Veere Di Wedding’ (2018) commented on the sensitivity with which the story was told.

Write, Gazal Dhaliwal has herself undergone sexual reassignment surgery and is very aware and intune with the issues LGBTQIA individuals face in Indian society.

The natural and skilful scripting was matched with masterful directing of the talented actors.

This has been the first mainstream LGBTQIA Bollywood romantic movie which has many established actors contributing to it.

Sonam Kapoor has been in her stride since films such as ‘Neerja’ (2016) this actress continually takes on roles that challenge normative thinking.

However, Rajkumar Rao has received the most praise as highlighted by the majority of stars tweeting specifically about his performance, including actress Manisha Koirala.

The film has been slow with morning collections but due to the niche subject matter of the film that was to be expected.

However, with this show of support from the Bollywood fraternity it appears this film may still become a box office hit.