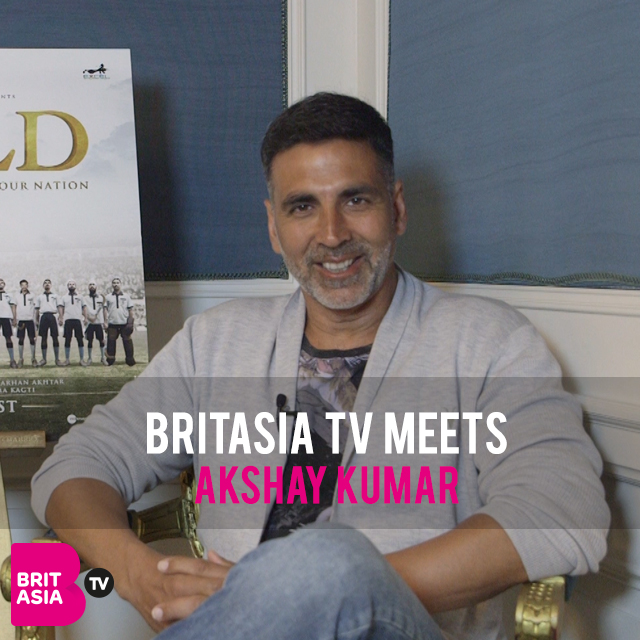 BritAsia TV caught up with Bollywood superstar Akshay Kumar to talk about his upcoming movie ‘Gold’.

Akshay Kumar is set to star in upcoming Bollywood movie ‘Gold’. The story of ‘Gold’ highlights India’s emergence from the shadow of the British Empire as it meets the British hockey team on the field, this time as a nation of its own. It’s an inspirational story of a team that fought all odds to bring their nation hope, pride and respect.

The actor plays the manager, Tapan Das, in the movie and audiences get a chance to see how the team would’ve been like in the 40’s, with the viewpoint from the manager.

In the movie, we see Akshay transformed into a 1940’s Indian complete with a moustache, slicked back hair and a suit that most men in the 40’s would be sporting. There was a lot of work behind the scenes, which involved the director and the crew carrying out a lot of research for the movie to make sure it looked authentic and as realistic as possible.

The Bollywood stars enthusiasm for the movie came from his love of sports. Akshay has always been a fan of Hockey, and told us that he played the sport when he was younger as well as Football, Cricket and Kabaddi – the popular sporting games in India.

Akshay hopes that the most important message audiences take away from this movie is the history and dream that untied India and Britain, and the importance of participating in sports. He hopes that parents encourage their children to take part in a sport, and believes that the movie will inspire parents to do so.

‘Gold’ is due to be released in cinemas on the 15th August. In the meantime, catch the full interview below with Akshay Kumar.