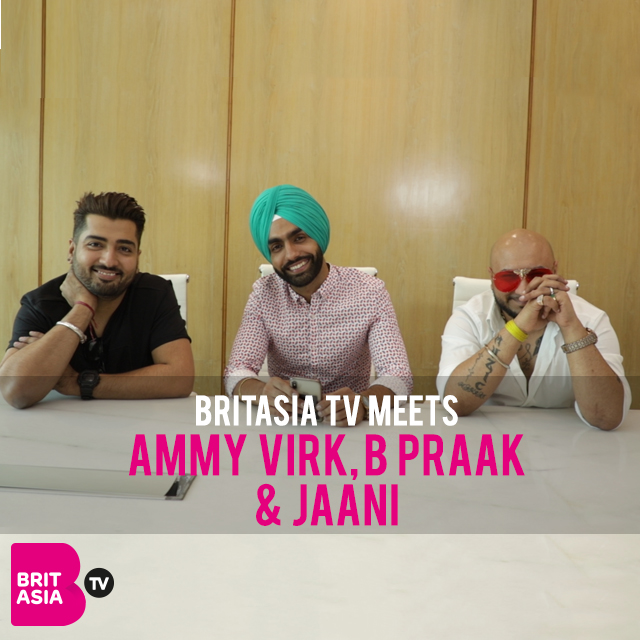 BritAsia TV caught up with Punjabi singer and actor Ammy Virk, Jaani & B Praak to talk about their latest single ‘Hath Chumme’.

Since the release of ‘Hath Chumme’, it has already gathered over 25 million views and has been showered by love by many artists in the industry such as Jaz Dhami, Jassie Gill, Sharry Mann and many more.

The track became one of the most anticipated tracks of the year, and was the first one to be produced and released by Jaani and Arvindr Khaira’s new music label, ‘Desi Melodies’. Lyricist Jaani worked his magic again on this track, and has written some heartfelt lyrics for it and commented that the inspiration behind the track was from a real-life event.

Jaani told us that the idea of setting up ‘Desi Melodies’ was to release soft, sad ballads that everyone knows and loves from himself and B Praak, and wanted a hub where fans can listen to that style of music.

Fans of Ammy Virk haven’t heard new music from the singer since the release of ‘Qismat’ in 2017, so the new single came to a delight to his many fans. Ammy told us that he wanted to focus on his acting career, and didn’t have time to release music apart from songs for movies. He also told us that he wanted to generate competition with himself, and release a song that was bigger than ‘Qismat’.

We can expect to see a lot from Ammy in the next few months, as he has his movie ‘Qismat’ releasing in September with fellow Punjabi actor Sargun Mehta. B Praak has also been busy with his music, and will be releasing his debut single, titled ‘Masstaani’. He has worked alongside Jaani again, who has written the lyrics. The duo have also teamed up with famous music director Avrindr Khaira, who has directed the music video.

Check out the full interview with Ammy Virk, Jaani and B Praak below.