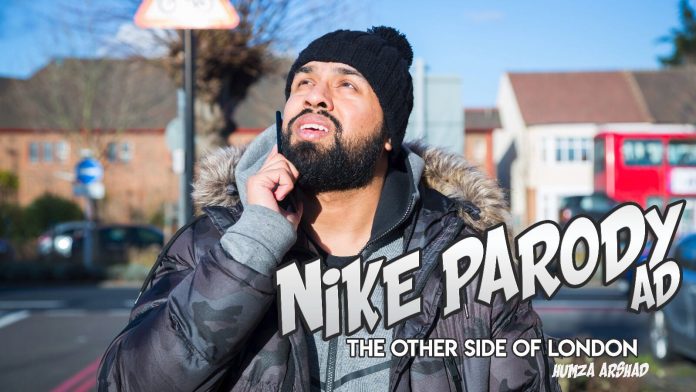 Some of the biggest British Asian singers, producers, actors, and influencers have teamed up to film a parody to Nike’s recent advertising campaign, “Nothing Beats a Londoner”.

“The Other Side of London”, has been led by YouTube star Humza Arshad, famously known for his ‘Diary of a Badman” YouTube series, and featured the most popular faces from the music scene such as Naughty Boy, Steel Banglez, Jay Sean, Arjun, Raxstar, Juggy D, and H Dhami. It also features online influencers such as Hussain Manawear, Tez Ilyas and DJ’s Kand D Man, DJ Limelight, and Bobby Friction with many more stars included in the video.

From scenes set in Southall to Green Street, all British Asians will recognise the familiar settings and be able to relate to many of the representations addressed in the video, from Humza asking Dj Limelight “What did your parents want you to be when you grow up” in a chicken shop, to showing Asians owning and working in a corner shop.

The stereotypical representation of Asians in the media have been put together cleverly in this video in a light-hearted manner, but overall highlights the fact that there is a huge lack of British Asians in the mainstream media.

On speaking about the huge collaboration, Humza Arshad said: “As a big fan of Nike and having seen the recent Nike advert, a representation of London culture, I was inspired to create a moment that represented British Asian London.

This was an opportunity to collaborate with other like-minded creative talents and promote our unique culture and lifestyle. The group that has come together for this have individually been incredibly successful in their respective fields, so to have them all together to represent our community is a really special moment which I hope will positively showcase and represent diverse British Asian talent from London.”

The “The Other Side of London” focuses’ on the British Asian names that have contributed massively to the media and shows the side of London that isn’t represented in the media. It’s a refreshing parody, and we’re sure many British Asian’s can relate to it.

Check out “The Other Side of London” below.