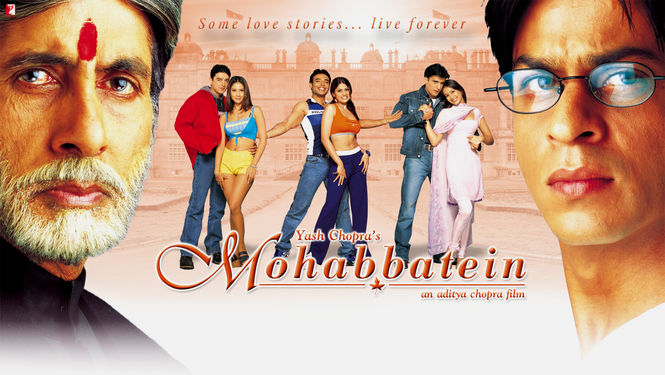 Following the critical success of his directorial debut Dilwale Dulhania Le Jayenge in 1995, Aditya Chopra blessed Bollywood with a career-defining, heart-wrenching tale of love over fear with Mohabbatein. To commemorate its 20th anniversary, BritAsia TV take a look at some lesser-known facts about the film, while we celebrate two decades of sweeping romance.

For the first time in film, Bachchan and Khan co-starred for what would later serve as a silver-screen cementing phenomenon.

Helmed by Yash Chopra’s son, Aditya Chopra, Mohabbatein remains one of the most-cherished Hindi films since the millennium. The musical romantic drama evolved into an eternal classic for Indian cinema with its poignant and powerful lesson on love, leaf-strewn cinematography and a soundtrack that has proved evermore timeless — with songs like Aankhein Kuli, Humko Humise Chura Lo and Soni Soni.

The story centres on a negotiation between love and fear: A battle between two obstinate individuals (Khan and Bachchan) and their conflicting beliefs about the power of love.

Today, Yash Raj Films shared a selection of snippets to commemorate the film on Instagram: “A film which made us believe that love always wins over everything.”

Take a scroll back in time here.

Taking to Twitter, AB shared his sentiments on the film’s anniversary, tweeting “Parampara, Pratishtha, Anushasan .. Mohabbatein is special for many reasons .. 20 years of this beautiful love story, a roller coaster of emotions. Eternally grateful for all the love you continue to shower.”

T 3702 – Parampara, Pratishtha, Anushasan .. Mohabbatein is special for many reasons .. 20 years of this beautiful love story, a roller coaster of emotions. Eternally grateful for all the love you continue to shower. #Mohabbatein20 | #AdityaChopra | @yrf pic.twitter.com/6O23l216qL

He also shared his appreciation for the film’s soundtrack, tweeting: “The music of this film is a treasure .. The lyrics, the composition, each song is exceptionally made .. Happy to have been a part of this film.”

T 3702 – The music of this film is a treasure .. The lyrics, the composition, each song is exceptionally made .. Happy to have been a part of this film.
Relive the music: https://t.co/jMEWBheSxU#Mohabbatein20 | #AdityaChopra | @yrf pic.twitter.com/ELHWVdTWFa

And to commemorate the film’s 20th anniversary, we take look at some lesser-known facts of the millennium-made film according to Indian Express: