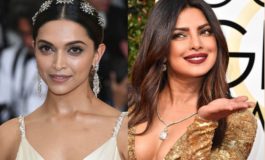 Deepika Padukone has opened up about the US media mistaking her for fellow Indian actress Priyanka Chopra.

Over the last few months, Deepika Padukone has been mistaken for Priyanka Chopra by numerous paparazzi and American Media, as both stars rise to fame in Hollywood. One example of this is captured in the video below where the US media outside LAX greeted Deepika with “Hello Priyanka” multiple times.

Deepika has remained fairly reserved about her feelings in relation to the mishaps UNTIL NOW! Earlier this week, Deepika called out the international press at a press conference in Cannes; labelling this behaviour as an act of racism.

She said; “It’s not just me who should be offended but each one of you should also be offended because it’s not just ignorance but also racism. Two people of similar colour are not the same people.”

Her comment comes a day after Priyanka’s interview, where she also slammed the foreign media calling it ignorant. The actress said that she saw the video of Deepika being greeted as ‘Priyanka’ and she felt it wasn’t fair.

When asked if she had seen the video, Priyanka said; “I did see that and you know that’s just ignorance and it’s not right. I guess I’m the most popular brown face that everyone has known. Every brown girl does not look the same. Don’t mistake it. Let’s try and tell us apart. That was not right and it’s not fair, she is a massive star from India.”

Let us know your thoughts at BritAsiaTV.