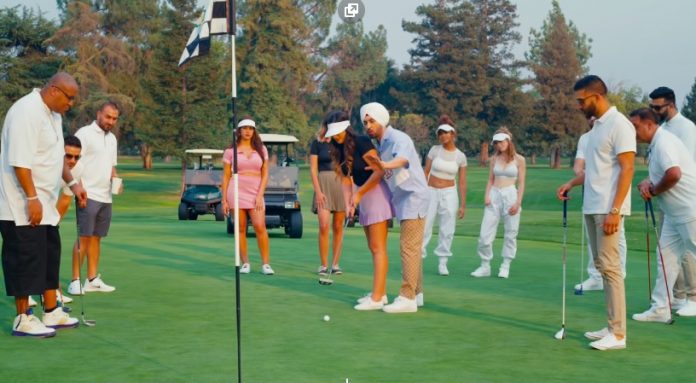 Diljit Dosanjh has released the music video for ‘Born to Shine’ — the fourth song on his new album ‘G.O.A.T.’

With lyrics by Amrit Maan and music by Desi Crew, ‘Born to Shine’ is the latest video by the singer-actor, after reaching the top spots on the Official Punjabi Music Charts for ‘Clash’ and ‘Peed’ from the same album.

The song premiered on YouTube over the weekend and has already amassed over 12M views with over 450K likes as of now. Ahead of the release, Dosanjh shared several behind-the-scenes pictures and snippets on his Instagram page.

In one clip, he shares the audio with his fans, moving his head to the beat of the song outside a hotel, which features a gushing waterfall in the backdrop.

In the full video, the ‘Patiala Peg’ hit maker can be seen cruising in luxury convertibles, taking a swing at a golf course and making it rain in a casino. And despite the pandemic, Dosanjh successfully shot the video over two weeks across California including San Francisco, the Bay Area and Sacramento in August – with social distancing in place.

Dosanjh told Mid-Day he worked with his US-based team and a local crew to breathe life into his video. And he was relieved that shoot, directed by Rahul Dutta proved seamless given on-set restrictions. He said: “As per the rules, if you are shooting indoors, there cannot be more than 12 people at a time. When shooting outdoors, not more than 25 people are allowed. We ensured we had less than 12 people on our set.”

He also revealed that individuals were assigned four jobs each and because there was no costume designer, he had to choose his own clothes and iron them himself too.

Watch the full video here 👇 and remember to give a thumbs up 👍!