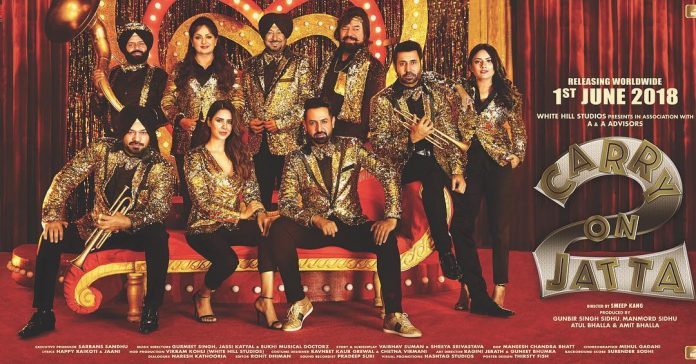 Punjabi singer and actor Gippy Grewal has shared a poster of his upcoming Punjabi movie ‘Carry on Jatta 2’.

Gippy Grewal has recently starred in the successful movie ‘Subedar Joginder Singh’ and is one of the most versatile actors right now. We can see him in either action, drama, comedy or romance movies and he doesn’t disappoint in each role.

One of his films ‘Carry on Jatta’, which was released in 2012 was a huge hit, and last year the actor pleased his fans by announcing the sequel, ‘Carry on Jatta 2’.

If the announcement of the sequal wasn’t enough, the star-studded cast shown on the poster is more than enough to get fans excited over the movie.

The big names from the comedy scene in the Punjabi industry, can be found on the poster including Binnu Dhillon, Jaswinder Bhalla, B.N. Sharma and Upasana Singh who are the new members to the movie.

We can also see Gippy Grewal and Punjabi actress Sonam Bajwa as leads in the movie.

Fans can expect this film to be bigger and better than before, with the cast’s glittering costumes and bigger cast.

‘Carry on Jatta 2’ is set to be released in cinemas 1st June, and a third instalment of the movie has also been announced.