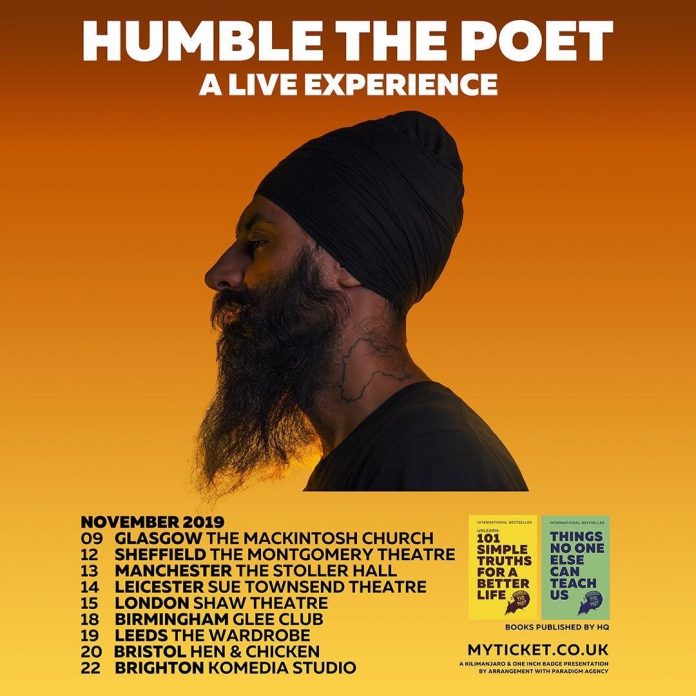 Humble the Poet, (Kanwer Singh) the multi-talented Toronto based MC/Spoken Word Artist is going on a UK Tour!

When announcing the UK, tour Humble expressed gratitude to his fans, stating that the last time he had his own show in the UK was in a small spot back in 2014:

🇬🇧ATTENTION MY HANDSOME UK FRIENDS – COME SEE ME ON TOUR!🇬🇧 It's been 5 years since I've toured the UK, and we have a whole lot to catch up on. I'm excited to see everyone, and share this unique performance experience with my UK family Tickets are now available. Can't wait to see you there 😊 I’ll be sharing my music, my poetry, reading from my book, and sharing my stories in an intimate and interactive environment. Bring a friend and tell your neighbours! VISIT myticket.co.uk/artists/humble-the-poet

Humble has recently released his book ‘Things no one else can teach us’ which comes two years after his first book ‘Unlearn: 101 Simple Rules For a Better Life’

Fans can expect a whole load of wisdom from Humble on this tour as previous shows have been described as: ‘dynamic live sets that shake conventions and minds at the same time.’

Humble’s tour kicks off on the 9th November in Glasgow, and you can catch him around UK during the whole month of November!