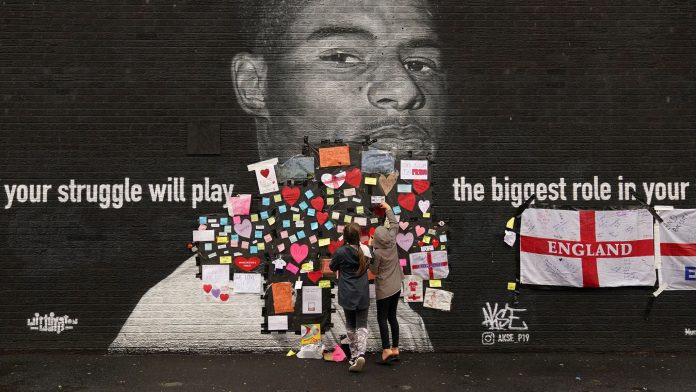 Marcus Rashford has directed a poignant and powerful message toward racists as fans covered a vandalised a mural of him with notes of support.

Rashford was one of three players to miss a penalty alongside Jadon Sancho and Bukayo Saka in the Euro 2020 Final Wembley on Sunday. All three have since suffered racist abuse on social media.

In a lengthy and affecting message that he shared on social media, Rashford responded by saying: “I will never apologise for who I am”.

Speaking about the match against Italy and its aftermath he wrote “all I can say is sorry” for the spot kick.

It came as fans covered a mural of him in Manchester that had been defaced with messages of support.

He said: “I don’t even know where to start and I don’t even know how to put into words how I’m feeling at this exact time. I’ve had a difficult season, I think that’s been clear for everyone to see and I probably went into that final with a lack of confidence.”

“I’ve always backed myself for a penalty but something didn’t feel quite right. During the long run-up, I was saving myself a bit of time and unfortunately, the result was not what I wanted.

“I felt as though I let my teammates down. I felt as if I’d let everyone down.

“A penalty was all I’d been asked to contribute for the team. I can score penalties in my sleep so why not that one? It’s been playing in my head over and over since I struck the ball and there’s probably not a word to describe how it feels.

England captain Harry Kane also told those behind the racist abuse of his team-mates: “You’re not an England fan and we don’t want you.”

“They deserve support and backing, not the vile racist abuse they’ve had since last night,” Kane said.

“Three lads who were brilliant all summer had the courage to step up and take a pen when the stakes were high,” the Tottenham striker added on Twitter.

“If you abuse anyone on social media you’re not an England fan and we don’t want you.”

A mural in Rashford’s honour in Withington, south Manchester, was defaced within hours of his missed penalty in what police are treating as a racist incident. But by Monday, messages of support started to appear.