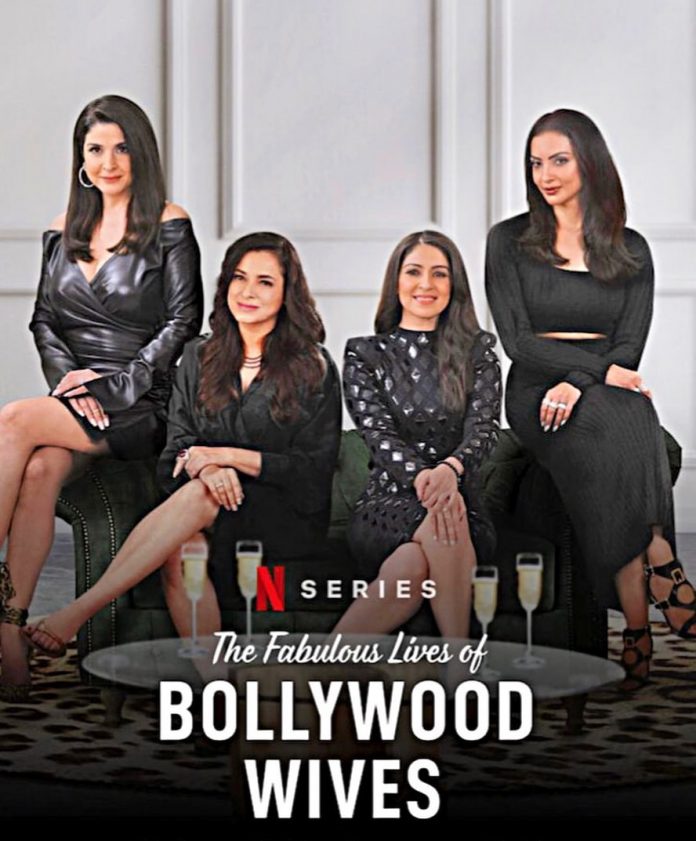 In its second season, The Fabulous Lives of Bollywood Wives perfects its cocktail of cringe and voyeurism, making a solid case for Bollywood wives as both, a subject of entertainment and a victim of their own entertainment.

There’s a moment in the second season of The Fabulous Lives of Bollywood Wives that ends up being a masterclass in finding that delicious blend of cringe and exaggeration that underlines satisfying reality television. Picture this: four 40-something celebrity wives with seemingly “fabulous lives” book themselves on a luxury glamping vacation in the jungles of Rajasthan. They’re dressed to the nines in camo-coordinated outfits tempered with perfectly blow dried hair and oversized aviators as they head out for a jungle safari ride. In the jeep, the four ladies express their excitement at spotting leopards before jokingly referring to themselves as big cats. They spot an antelope and seem awed at the wonders of nature. Then, without warning the moment completely turns on its head when they approach an Indian rock python.

“I don’t do reptiles,” one of them yells at a frantic pitch. Another just keeps screaming. Both of them keep threatening the driver to take an U-turn and head back. Their guide struggles to keep them calm while simultaneously requesting them to be quiet so as to not attract the attention of the reptile. His pleas go in vain. At this point, the two women have become masters at chaotic comedy: like 20-year-olds on their first trek in the Himalayas, they alternate between shrieking and closing their eyes; one of them starts chanting vigorously, convincing herself that “everything will be absolutely fine” even though everything is in fact, absolutely fine. The other is on the verge of tears, exclaiming “I want to go home.” Then they start bickering between themselves convinced that their lives are in immediate danger if they quieten down for even a millisecond. Far away from them, the python on the other hand, looks as relaxed and well-behaved as it could ever be.

It’s hard to tell who is watching whom at this moment — or rather, who is encroaching on whose space. But one thing is for sure, this scene doesn’t hold back in capturing the unfiltered absurdity of grown, affluent women ditching all pretense of civility, class, and charisma to reduce themselves into whimpering messes. “She was screeching like a piglet having an orgasm,” one of them tells the camera in hindsight, registering her embarrassment. In fact, much of the pleasures of the scene is just how out of place these four women looked in the jungle; a metaphor for how out-of-touch their realities are from the rest of the country.

It’s this exact cocktail of cringe and voyeurism that makes the second installment of The Fabulous Lives of Bollywood Wives so damn engrossing. The point of reality television isn’t just to convince viewers that its subjects are worth laughing at; it’s also to make viewers want to keep watching them at all. This season, the show improves by leaps and bounds on the awkwardly-staged first season, making a solid case for these rich socialites as both, a subject of entertainment and a victim of their own entertainment. By doing so, it side-steps the crucial shortcoming of the last installment, ending up as a razor-shop examination of the distance between fame and wealth even for Bollywood wives.

Each of the four wives of the show — Neelam Kothari Soni, Maheep Kapoor, Seema Sajdeh, and Bhavana Pandey — aren’t exactly famous or relevant. At best, they’re fame-adjacent: Kothari Soni was a former actress and now jeweler; Sajdeh used to be married to Sohail Khan, famous for being Salman Khan’s brother; Kapoor is married to Sanjay Kapoor, famous for being Anil Kapoor’s brother; Bhavana Pandey is the mother of actress Ananya Pandey, who’s infamous for having less than two expressions in every movie she stars in.

Their lack of relevancy isn’t a joke; it’s a fact — they might be connected with people who are famous (case in point: Karan Johar, the producer of the series) and adhere to a lifestyle that points to affluence but it’s made clear throughout the series, that fame remains constantly out-of-their-reach even when it’s the only thing on their mind. Similarly it remains aware of their equations. As the first season underlined, these women have been friends through over two decades. But if that season was pliant enough to suggest that they’re a family, the new season takes to documenting the cracks. From the very first episode, the show doesn’t only spotlight the two factions — Pandey and Kothari Soni on one side and Kapoor and Sajdeh on the other — but it also pits them against each other for melodrama and spectacle. By being acutely aware of their place in their own celebrity circles, the second season of The Fabulous Lives of Bollywood is able to turn their stabs at both relevancy and fame as a punchline.

Each of the cleverly-constructed eight episodes of this season feature a celebrity cameo: Johar is a constant fixture as is Gauri Khan, arguably the only star wife in the whole series. There’s also Arjun Kapoor, Zoya Akhtar, Badshaah, Bobby Deol, Shweta Bachchan Nanda, Malaika Arora, Jackie Shroff, and Ranveer Singh, arguably the only entertainer in the whole series. These appearances are surely engineered to add social currency to the proceedings but what they ultimately do is reveal the hierarchies of fame — reiterating that the four wives live actually on its margins. Fame isn’t an accessory for them, it is rather a pretense.

It’s the collective commitment to this pretense that lends The Fabulous Lives of Bollywood Wives a bingeable quality. Kapoor reprises her smart-mouth from the last season, vomiting out her usual catchphrases (“shway shway,” “fab”, “twits”, “stupid cow) but it’s her unwavering performance of celebrity that takes the cake. She carried a limited edition Bottega handbag to a brunch with the wives and their husbands that becomes the subject of mockery. Her teenage son is an aspiring actor who can’t speak Hindi. She treats her aspiring actress daughter whose movie is currently unreleased as if she’s the Meryl Streep of her generation, packing six suitcases for her before sending her off to an “acting workshop” in one episode. In another episode, she likens infidelity as a forgettable breach of trust and arranged marriage as a perfectly suitable way of coupling. Sanjay Kapoor, her husband, on his part, suggests that they’re poor people who can’t afford divorce while munching on avocado toast and lecturing his daughter about GST, both of which are markers of anything but poverty.

As this season confirms, there’s nothing more fun than watching educated, well-heeled celebrities act like prudes and victims. Kothari Soni likens her discomfort with the words “vagina” and “menopause” as an outcome of being proper; she worries about kissing on camera for the part that Akhtar has cast her for in the second season of Made in Heaven and tells Sameer Soni, her husband, that now that she will be kissing on camera, she will stop giving him grief about doing the same on screen.

Pandey on her part, keeps pretending as if Chunkey and Ananya Pandey have both been wronged by audiences, as if it’s completely unfathomable that people paying their hard-earned money to watch both of them on screen can exercise their right to express their dissatisfaction with their non-existent acting skills. Still, none of it holds a candle to Sajdeh’s comical attempts at “finding” a cause to believe in or her second-grade designs that her siblings says gives off a “serial killer vibe.” I waited with bated breath that atleast one of her friends would tell her that her designs, for the lack of a better word, suck. But I’d be lying if I didn’t admit that her celebrity friends let her believe that her designs have merit, made for absolutely irresistible television. That’s only because The Fabulous Lives of Bollywood Lives has finally figured that the strength of its premise doesn’t lie in making it seem as if these four women are just like us; it’s in not trying to fool us that they’re celebrity wives.