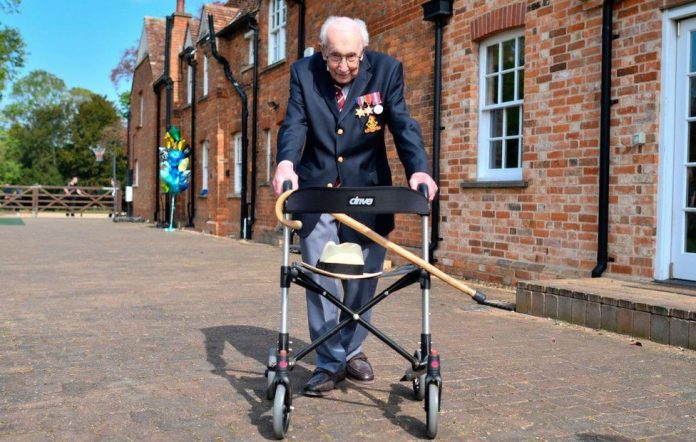 A day after Captain Sir Tom Moore’s death, the nation gathered on their doorsteps to pay tribute to the centenarian with a one minute’s applause.

Captain Sir Thomas Moore, popularly known as Captain Tom, was a British Army officer and businessman known for raising money for charity in the run-up to his 100th birthday during the COVID-19 pandemic.

On Tuesday 2 February, it was announced Captain Sir Tom Moore died with coronavirus.

The 100-year-old, who raised almost £33m for NHS charities by walking laps of his garden, was admitted to Bedford Hospital on Sunday.

The Queen led tributes to Capt Sir Tom, “recognising the inspiration he provided for the whole nation and others across the world”.

His daughters said they “shared laughter and tears” with their father in their final few hours together.

Announcing his death, Hannah Ingram-Moore and Lucy Teixeira said the last year of their father’s life had been “nothing short of remarkable”.

He tested positive for Covid-19 last week. His family said due to other medication he was receiving for pneumonia, he was unable to be vaccinated.

A day after his death, the nation gathered to applaud Capt Sir Tom on their doorsteps, broadcasted by Sky News.

The Army veteran won the nation’s hearts by walking 100 laps of his garden in Marston Moretaine in Bedfordshire last year during the first lockdown, raising money for NHS Charities Together.

He was credited with lifting the nation’s spirits and his saying “Tomorrow will be a good day” trended on social media.

in a statement, Prime Minister Boris Johnson said: “Captain Sir Tom Moore was a hero in the truest sense of the word. In the dark days of the Second World War he fought for freedom and in the face of this country’s deepest post-war crisis he united us all, he cheered us all up, and he embodied the triumph of the human spirit.

“He became not just a national inspiration but a beacon of hope for the world. Our thoughts are with his daughter Hannah and all his family.”

The flag above 10 Downing Street has been flying at half-mast in tribute and Mr Johnson has spoken to Mrs Ingram-Moore to offer his condolences.

BritAsia TV extends their condolences to Captain Sir Tom Moore, his family and friends around the world.