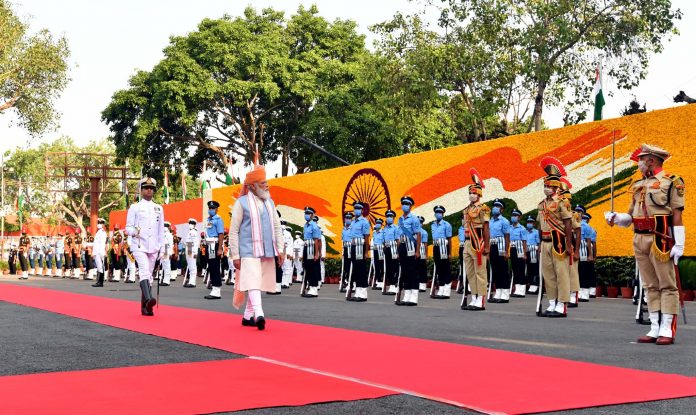 Indian Prime Minister Narendra Modi addressed the nation from the Red Fort in New Delhi on the eve of India’s 75th Independence Day.

On 15 Sunday, India marked the occasion as “Azadi ka Amrit Mahotsav” under which a series of events were organised across the country.

“Greetings to you all on Independence Day. May this year of the ”Azadi ka Amrit Mahotsav” infuse new energy and new consciousness among the countrymen. Jai Hind!” tweeted PM Modi.

Mr Modi also paid homage to Mahatma Gandhi at Rajghat before he addressed the nation.

Paid homage to Mahatma Gandhi at Rajghat. His thoughts and ideals continue to guide us as we work towards fulfilling people's aspirations. pic.twitter.com/BDmBxwWWcD

A summary of highlights from PM Modi’s Independence Day speech (translated in English) are as follows:

The analysis argued that while PM Modi acknowledged that many Indians died of the virus, he “didn’t talk about the oxygen shortage issue.”

PM Modi mentioned the Covid vaccination but “didn’t talk about the need to increase the pace of the drive, and didn’t say much about the fears of a third Covid wave and how his government plans to handle it this time,” it added.

The report also argued that while the PM presented a grand vision of India’s growth story in the next 25 years, he “didn’t say much about his strategy to overcome the immediate challenges of the struggling economy, which has been marred by high inflation and rising unemployment.”

Mr Modi’s announcements did however touch on positive points, such as the focus on green energy, building roads in villages and ensuring all Indians have a bank account in the near future.