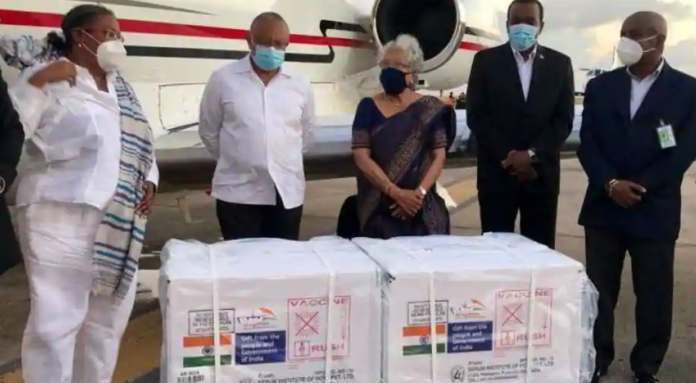 Some Caribbean and Latin American nations have received their long-awaited vaccines, in the form of of India’s Covishield, developed by AstraZeneca Plc.

India is making and supplying tens of thousands of free Covid-19 jabs to Caribbean and Latin American countries that have otherwise been left behind the affluent countries, in the global race to procure vaccines.

As the leader of a small Caribbean island is still battling with the aftermath of a hurricane four years ago, Prime Minister Roosevelt Skerrit thought securing an adequate supply of Covid vaccines any time soon was a foregone conclusion. Until a call to India changed their fate.

Last week, an airplane carrying two consignments of Covishield, the India-produced version of the AstraZeneca vaccine, landed in the Caribbean. One was for Barbados, which would receive 100,000 doses, and the other for Dominica, which received 70,000 doses, Miami Herald reports.

“I must confess that I did not imagine that the prayers of my country would be answered so swiftly,” said Skerrit, who plans to use some of the supplies to vaccinate many of his 72,000 inhabitants in Dominica and share the rest with neighbouring Caribbean islands.

The article added, Dominica and Barbados are among a handful of Caribbean and Latin American countries that are benefiting from the liberality of India, a pharmaceutical giant that isn’t otherwise a conventional foreign partner in the region, but has started to make the most of its drug producing faculties.

While the COVID-19 vaccine diplomacy has been met with mixed responses in some parts of India, Miami Herald adds, it is being welcomed in the Americas, where countries have been forced to turn to China, Cuba and others to cope with the pandemic in one of the world’s hardest hit regions after being ostracised by the U.S. market.

In the last week of February, India-produced vaccines landed in several nations in the region. Flights carrying vials arrived in Antigua and Barbuda, as well as in the Dominican Republic, whose vice president Thursday announced the pending arrival of 30,000 donated doses. El Salvador and Argentina also received shipments a week later, with their leaders taking to social media to thank the Indian government.

India’s Ministry of Foreign Affairs said in an email that the nation plans to make a humanitarian donation of 570,000 doses of vaccines to countries in the 15-member Caribbean Community bloc, known as CARICOM, as well as Cuba and the Dominican Republic.