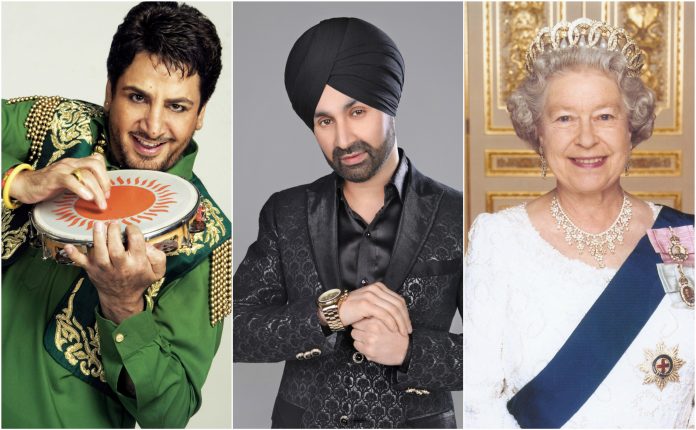 Buckingham palace hosted the launch of the UK-India Year of Cultural last night and some of India’s most prestigious celebrities attended the event. The glittering reception was attended by the Queen, Prince Philip and the Duke and Duchess of Cambridge.

Celebrities and royalty mingled as they watched dancers perform and were treated to canapes that were a fusion of British and Indian food. The evening also showcased articles that showed the unity between the two nations such as a shawl made by Mahatma Ghandi that was gifted to Queen Elizabeth. The Queen greeted all of the guests and even projected a specially designed image of India’s National bird on the side of Buckingham Palace. A large image of a peacock made up of indian dancers and musical instruments was projected for all of the public to join in on the celebrations.

Kunal Nayyar said that he was ‘Overwhelmed’ by the reception and other celebs have tweeted their excitement for meeting the royal family. Last week news broke out of Amitabh Bachchan declining the Queen’s personal invitation but it appears that she wasn’t short of guests for the evening. The launch marks the start of the UK-India Cultural year which will see even more celebrations of cultural ties between the nations to come. Some celebrations include the circulation of important British texts around India and the opening of a new Madame Tussauds museum in New Delhi.

What do you think of all of these celebrities meeting the Queen? Let us know your thoughts. #BritAsiaTV