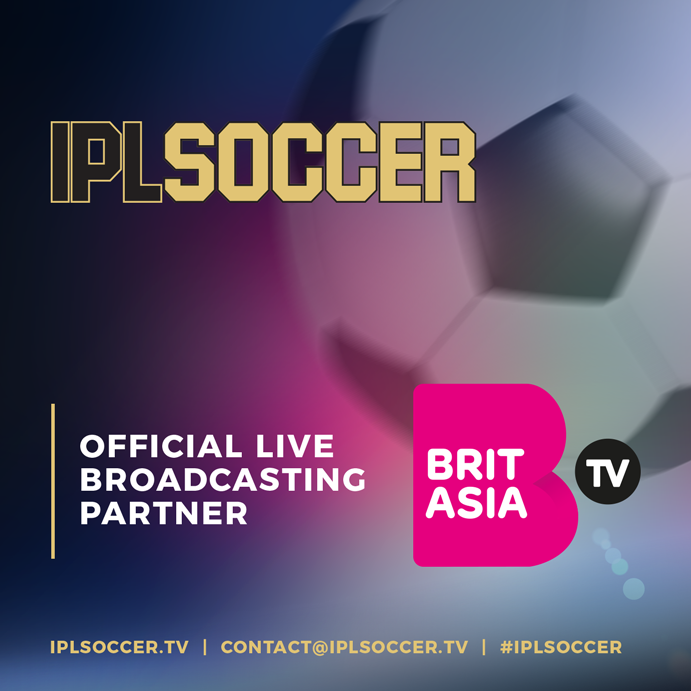 IPLSOCCER is a competitive 7-a-side indoor football competition, with selected UK City teams headed by celebrity owners. IPLSOCCER will be the United Kingdom’s first nationwide Asian football tournament, which will be held annually, with handpicked celebrity owned City teams, and the matches to be played at an indoor arena in England.

Sany Supra, Founder & CEO of IPLSOCCER says: “We are delighted at partnering up with Tony Shergill and BritAsia TV to Live Broadcast the IPLSOCCER tournaments – giving young British Asians a genuine opportunity to take part and showcase their talents in this annual televised event reaching out to millions, and making some of these youngsters household names. As well as with the selected global celebrities on board as IPLSOCCER team co-owners, I do not see why we cannot get the next Asian Michael Owen or Ronaldo breakthrough from our talented British Asian youngsters. Ourselves and Tony especially, will leave no stone unturned to help showcase the best UK talents through IPLSOCCER in June 2020.”

With the added goal to get further UK Asians into professional football as well as showcase their talents on the big stage that will be the IPLSOCCER. As each team and owner is announced this November 2019 – their team will have trials from their Cities – and the TRIALS ARE TO BE OPEN FOR ALL to take part in. Please note – even though this tournament is aiming to get more Asians into professional football, this is in no way only exclusive for Asians to apply, everyone is eligible as we still respect that there is much unnoticed non-Asian young talents not signed up. The best 16 players from each City trial will be picked by our professional select team for the squad, and they will then play for their home City and celebrity owned team in IPLSOCCER.

Michael Owen, Ambassador of IPLSOCCER states: “Sport is one of the few institutions that can break down barriers and stereotypes but despite the diversity in the current England squad, no footballer of South Asia origin has won a senior England Cap in over 146 years and British South Asians continue to be under-represented in professional football. Improving those statistics and providing fully inclusive opportunities for all are at the core of the IPLSOCCER Programme.”

The desire is to get each player showcased at the IPLSOCCER, and thereafter to be scouted/directed into professional football contracts with clubs in the UK and abroad. We want to see the next Asian superstars across the board as there is no excuse for such lack of numbers representing Asians in football today, as we know there is huge talent still waiting to be discovered and given the opportunity.

Tony Shergill, CEO of BritAsia TV added: “We are delighted to be in partnership with Michael Owen and Sany Supra, for IPLSOCCER, as we are focused on creating opportunities for the Asian community and increasing awareness about the under representation of Asian participation within the football industry.”

Trials will be held for all ’16-32 year old’ young players of unnoticed talents as well as whom take part in local football leagues and academies – the door is open to all! As this is the time to get on! We are merely providing a stage for all British youngsters to advance and be part of IPLSOCCER – the rest is up to each individual to prove their ability and determination to succeed.

Register your spot at the OPEN TRIALS for the IPLSOCCER ‘June 2020’ tournament now. Calling out all youngsters for the Birmingham, Derby, Leicester and London teams!!!