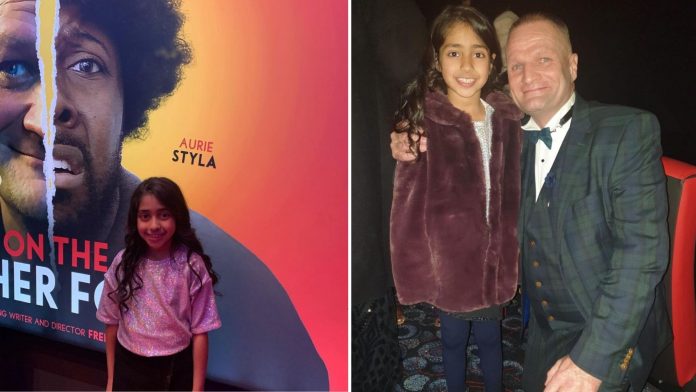 British-Indian child actor and model, Jiya Samra, has made her acting debut in the British film On the Other Foot, starring Peter Andre.

Jiya Samra, aged eight, was six-years-old when she filmed her scenes in British film On The Other Foot.

In a synopsis shared by Odeon, the film follows Billy Pitcher, a London cabbie, a devout football fan and an “out-and-out racist”. Billy, who is “constantly pushing his right-wing agenda,” is tipped over the edge when he learns his daughter is dating a Black man.

After attending an African church ‘UMBADEHDEH’ (a spiritual day where dreams and nightmares can come true), Billy wakes up the next morning inside a Black person’s body.

What follows is an “intelligent narrative, a comedic journey of gut-wrenching laughter”, as he finds out first-hand what it’s like to be Black in today’s society.\

Watch the short trailer for On the Other Foot here:

Jiya, who attends St Andrews First School in Barnt Green, Redditch, plays the part of a homeless refugee child and can be seen in the opening shots of the film.

Speaking to the Redditch Advertiser, Jiya’s mum, Gurminder Kaur said: “It was very educational for her, she had to put herself in a homeless person’s situation.

“She did a really good job and got good feedback.

Jiya was encouraged by her grandmother Resham Sohi, to take the part, who passed away before the film was finished.

Gurminder added: “Jiya’s Nan was the anchor in our lives, she lived with us in Redditch and was the person to set Jiya on this journey through her encouragement and support.

“Sadly Jiya’s Nanna passed away before the release of the film but Jiya is sure that Nanna is watching from heaven.”

On The Other Foot will be screened in 90 Odeon cinemas across the country from 23 March, 2022.