Mariah Carey’s performance on New Year’s Eve in New York City will go down in history as one of the biggest fails in lip-sync history. 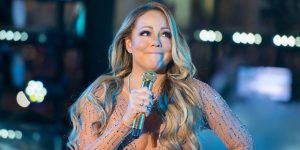 Carey performed some of her classic hits during Dick Clark’s Rockin’ New Year’s Eve show with Ryan Seacrest. She was clearly lip-syncing during the performance.

Carey has expressed no real disappointment of the performance. The star used social media platform Twitter to tweet a GIF of herself with an “I don’t care” expression, writing: “Shit happens. Have a happy and healthy new year everybody! Here’s to making more headlines in 2017.”

What do you think of the star’s mishap? Share your thoughts #BritAsiaTV