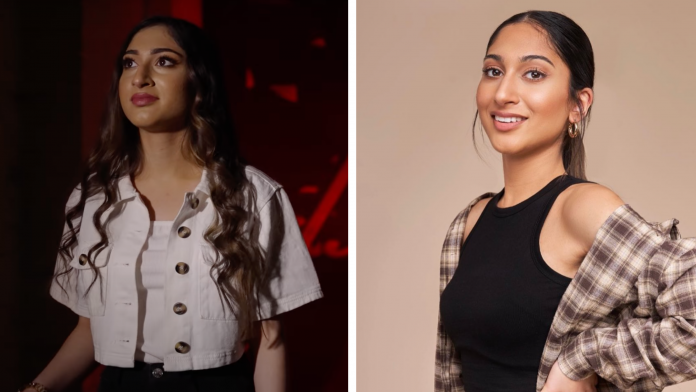 The Hilltop Studios has launched newcomer Khushi, 17, who has been singing since she was age 11. Her debut release is a cover of Neeti Mohan’s Nainowale Ne with music by Samraj.

Khushi started performing Kirtan in the Gurudwara from the age of 11 and developed a passion for music. She later began taking singing lessons by a professional teacher to develop her craft.

Her first stage performance was at a Lohri event to help raise money for vulnerable girls in India and in 2018 she was awarded ‘Best Newcomer’ at the UK Bhangra Awards.

Her debut release is a cover of Nainowale Ne which released in 2018, originally performed by Neeti Mohan and visualised on Deepika Padukone and Ranveer Singh from the Bollywood film Padmaavat.

Explaining why she chose the 2018 Bollywood song to launch her musical career, Khushi said: “I wanted to start my career with this song because I love the music, lyrics and the ways it’s been sung. I have just put my voice to it without trying to change it up too much.”

In an interview with Simply Bhangra, Khushi spoke about her experience so far with The Hilltop Studios, studying in between and more about her debut single.

“There is a lot going on at the moment,” she said. “While working with The Hilltop Studios over the last year or so I have been exposed to many different opportunities and experiences, that have allowed me to learn a variety of new skills – many of which I never had before. Alongside this, I have also been studying for my A- Levels, and I hope to attend university next year.

“In terms of Nainowale Ne, at the very beginning, I was asked to sing a 30 second recording of the song just to see how it sounded, this was really liked by the music producer, and we moved forward with the song.”

She also spoke about her journey so far and how she was approached by the record label last year.

“I began doing Kirtan in the gurdwara at the age of 11. Soon after, my mum made me realise that I actually had a passion for singing. I would sing at small events and family gatherings until my mum thought it would be ideal for me to begin singing lessons in order to enhance my knowledge of music and also receive the necessary training. I took lessons from my Ustaad (Roben Gill) for 5 years, alongside posting small covers on YouTube.”

She continued, “In lockdown, since we all had the opportunity to focus on the things that we are passionate about the most, I was able to practise a lot more as well as receiving training from the Shankar Mahadevan Academy.

“I began to post covers on my Instagram page. From this, I was approached by The Hilltop Studios who were extremely accommodating and comforting in ensuring that introduction into the industry was one of a smooth one. I signed to the label and we began to plan my journey, starting with Nainowale Ne.”

Speaking about her influences and who has shaped her creatively, Khushi said: “Artists like Nimrat Khaira, Diljit Dosanjh and Neha Kakkar in the Punjab industry really inspire me.”

She added, “Equally, I also look up to artists such as Jorjia Smith and I LOVE DRAKE. I have also grown up watching shows such as Indian Idol and Sa Re Ga Ma Pa which have also given me inspiration.”

The newcomer also opined about the music she hears today: “Since we live in a much more diverse society, I feel as though, nowadays there are different genres of music available, in order to meet the needs of all communities.

She added, “In the Punjabi industry, I feel that the quality of music that is being released in today’s market is diverse and thus, it meets the needs of all generations and all communities.”

The Hilltop Studios is an independent record and publishing company, with decades of experience and a genuine passion for music. The label works with a variety of newcomers to those already well-established, with a key focus in developing and helping them reach their full potential.

Discover more about Khushi Kaur via her website: www.khushi.uk