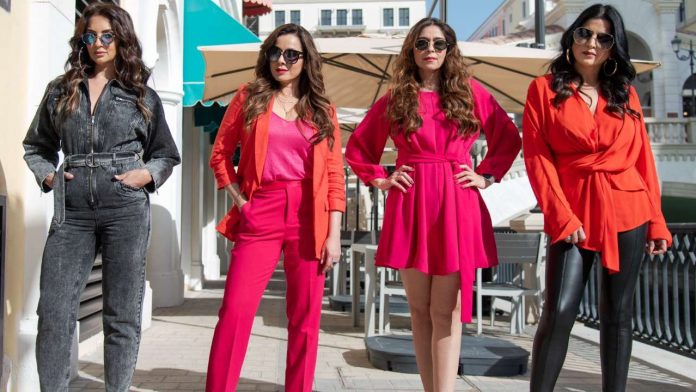 As camera crews tread on the stiletto heels of Maheep Kapoor, Bhavana Pandey, Seema Khan and Neelam Kothari, we observe the playful badinage and bonding between four vivacious women from Bollywood’s inner circle.

As soon as the series starts, audiences are able to take a peak into the different but intertwining lives of B-Town’s own ladies of luxury as they juggle their professions, parenthood and personal lives, for producer Karan Johar’s rendition of the American television franchise The Real Housewives.

Note: Neither one of the quartet are considered top-tier Bollywood wives — a title bestowed on the likes of Gauri Khan, who later makes a cameo on the show. However they are married to Indian actors with varying degrees of fame.

So who are they? Maheep is married to Sanjay Kapoor, the younger brother of the more famed sibling, Anil Kapoor. Bhavana is Chunky Pandey’s wife, Seema is married to Sohail Khan who we essentially only recognise through his A-list sibling, Salman Khan and Neelam is Samir Soni’s wife.

Here’s a summarised sneak peek into the first five episodes:

In episode 1, ‘Of Waltzes and Water Bras’, Maheep and Sanjay travel to Paris ahead of Shanaya’s debutante ball. Former actress Neelam considers a comeback. Bhavana and Seema enjoy family time.

In episode 2, ‘Werk It’, Maheep and her family enjoy a lavish night at le Bal. Bhavana, Neelam and Seema grapple with balancing work and life.

In episode 3, ‘Crabs, Claws and a Catfight’, a lunch date with Karan Johar gets tense as Bhavana and Seema butt heads. Neelam discusses acting opportunities with producer friend Ekta Kapoor.

In episode 4, ‘Feelings and Fillers’, a group lunch smooths ruffled feathers. Neelam has her first face-lift. A dinner with the husbands turns awkward as Maheep raises an unusual question.

In episode 5, ‘Fasten Your Seatbelts’, ahead of a girls trip to Doha, the women meet for a beach cleanup. Actors Raveena Tandon and Jacqueline Fernandez give Neelam and Seema career tips.

South China Morning Post writes of the reality TV stars, born in Hong Kong, Kothari Soni went to the city’s Island School before pursuing a career in Indian cinema, making her film debut in 1984. She comes from a family of jewellers and has her own jewellery brand, which sees her return to Hong Kong for trade shows. In the show she admits to being “prim and proper” and spends the series deciding if she should make her Bollywood comeback.

Khan, a confessed Kardashian fan girl, has her own fashion line known for its boho glam take on Indo-Western fashion. In the first episode she admits she is not in a conventional marriage with her husband, Sohail Khan.

Pandey is the wife of the late 1980s heartthrob Chunkey Pandey and mother of young Bollywood actress Ananya Pandey. A former air hostess, she has hosted events for luxury brands including Dior, Cartier and Louis Vuitton and is a co-founder of her own fashion street label LoveGen, which recently opened a flagship store in Mumbai.

Kapoor is known to be brazen and bold and openly describes herself as “vain as f***”. In the series she plans a girls’ trip to Doha, seemingly heavily influenced by the ostentatious glamour of the film Sex and the City 2. Her husband, actor Sanjay Kapoor, is currently shooting another Netflix series being made by Johar’s production company.

Check out the official trailer here: