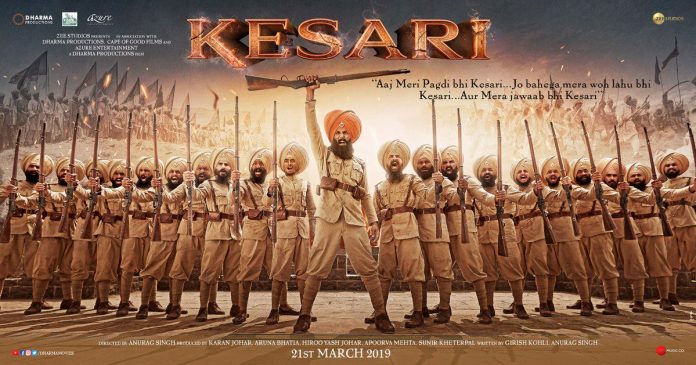 The makers behind the upcoming Bollywood movie ‘Kesari’ have released the second track from the flick titled ‘Ajj Singh Garega’.

It’s fair to say that the upcoming Akshay Kumar starrer is causing waves in the industry, and has caught the attention of many. After dropping the trailer and the first track ‘Sanu Kehndi’, fans have been eager to see more from the flick.

The latest release is an ode to the Sikh soldiers who fought bravely against 10,000 Afghan in the battle of Saragarhi.

The makers have enlisted the voice of Jazzy B, who makes the track what it is. The energetic number includes the sounds of electric guitars, drums and dhols which will connect you to the track instantly. ‘Ajj Singh Garega’ shows the true spirit of the Sikh soldiers, and Akshay Kumar and the actors display their courage brilliantly.

The track will leave you with Goosebumps and you’ll be wanting to add this to your must watch film list instantly.

‘Kesari’ is based on The Battle of Saragarhi took place on 12th September 1897. 21 Sikh soldiers, who were part of the British Indian army, were ordered to protect the forts of Lockhart and Gulistan, which bordered Afghanistan. 10,000 Afghan tribal warriors attacked the fort, but the 21 brave soldiers put their lives on the line to protect the country from their enemy. Check out the flick in cinemas 21st March!