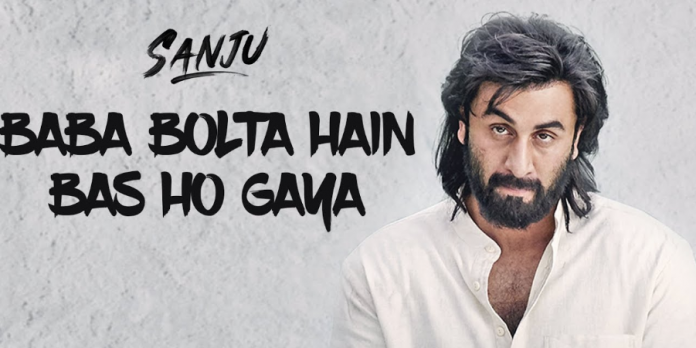 Baba Botla Hain Bas Ho Gaya is the latest song to be released from the ‘Sanju’ soundtrack which stars Ranbir Kapoor.

After the release of the movie on June 29th, Sanju received a phenomenal opening and praise from around the world. The makers of the movie have unveiled the final post credits track from the movie which features the real-life Sanjay Dutt.

It’s a sarcastic take on Sanjay’s life and shows how every aspect of the actor’s life gets blown out of proportion. In the video, we see the veteran actor as well as Ranbir Kapoor, who portrays Sanjay in the Rajkumar Hirani directorial, in front of newspaper cutting background.

The movie is a roller-coaster ride of emotions, love and friendship and the song depicts Dutt’s relationship with the media in a fun way. The end credit’s song fuffils the complete journey of his life.