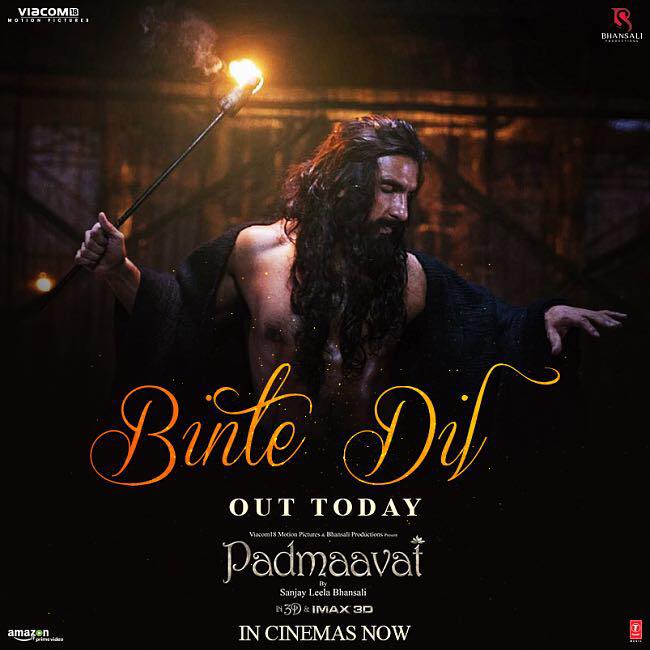 In this song, we see a new relationship between Ranveer Singh’s character Aluddin Khiliji and Jim Sarbh’s character, Malik Kafur.

Binte Dil Is a song dedicated to the love between Khilji and Kafur. Sang by Arjit Singh, Binte Dil is a sultry song, where Kafur is now more than a slave to Khilji, and there is a bit of his character that wants Khilji in a romantic way.

It shows that Kafur has a soft for Aluddin and is willing to do anything for him including singing behind a veil whilst Aluddin is with his wife.

Ranveer Singh took to twitter to share the new release, by letting his fans now that they’re in for a treat with this song.

There is a great chemistry between these two characters in the movie, and Jim Sarbh said in an interview, “I tried to reveal his complicated feelings and ambitions. I tried to portray his journey from being a slave and suddenly rising to the position of being the second most powerful person in the empire.

Imagine a man having a slave background to suddenly becoming the second most powerful person in an empire. He is kind of a sociopath. I think he is also extremely curious, curious about the hypocritical people around him.”

The song has been composed by the director Sanjay Leela Bhansali, who portrays the song beautifully and fits in well within the extravagant movie.

Padmaavat is in cinemas now and has been killing it in the box office.

Check out Binte Dil from the Bollywood movie Padmaavat below.