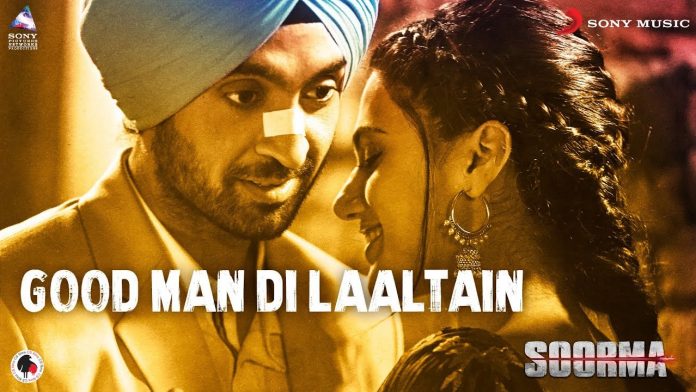 Good Man Di Laaltain is the latest song to be released from the upcoming movie ‘Soorma’ starring Diljit Dosanjh and Taapsee Pannu.

The third song from the soundtrack is a contrast from the previous releases, ‘Ishq Di Bajjan’ and ‘Soorma Anthem’, as this one is definitely one you can dance along to. It’s a celebratory dance song which features Diljit Dosanjh as Sandeep Singh with his family and Taapsee Pannu as Preet, as he is welcomed back home after being called Flicker Singh by the media.

Sneha Rajani, Head, Sony Pictures Networks Productions spoke about the song and said: This song highlights the celebration of Sandeep Singh’s family after he comes back home from a successful overseas tournament, where he was the highest goal scorer for India.

We have received phenomenal response to the first 2 songs and are hoping that this song too sung by Sukhwinder Singh, also gets a lot of love from the audience. And of course, the magic of Gulzar and SEL continues even in this song, like the rest of the album.

The video for the song is full of colour, and we see the whole cast happy and vibrant which will you leave the audiences feeling the same way after the two-minute-long track. Bhangra fans are in for a treat with this one, and Diljit’s Bhangra moves will leave you impressed.

‘Soorma’ is an inspiring true story of the triumph of the human spirit, about a player, who made headlines for his unbelievable comeback after an unfortunate accident through sheer determination, hard work and unrelenting passion for the sport.

The movie is due to be released on 13th July.