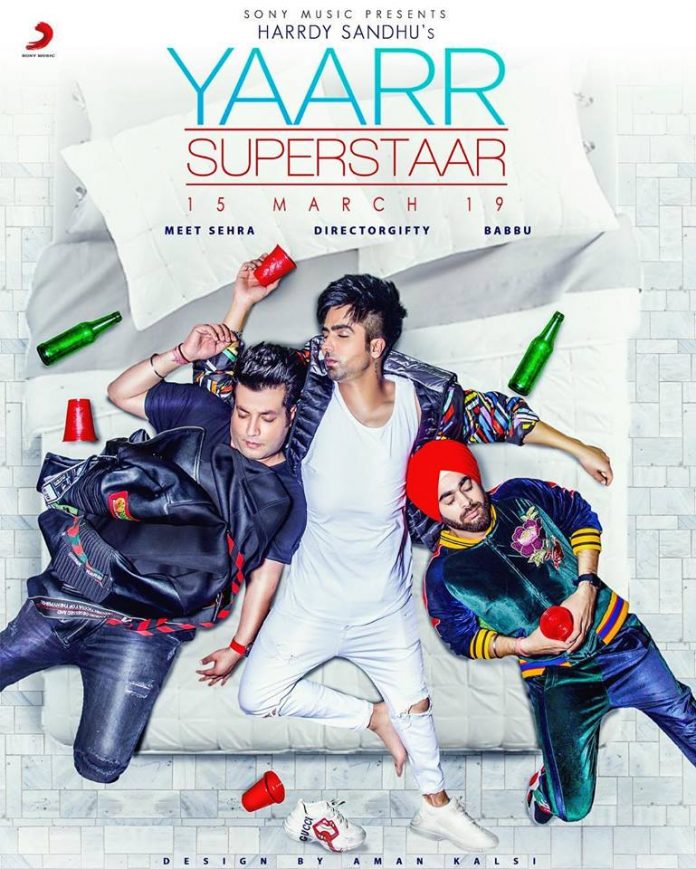 Harrdy Sandhu has released his first single of 2019, and he has made sure it is a track that will have you bopping away. After releasing tracks such as ‘Naah’ and ‘Kya Baat Ay’, he has kept that same vibe for the latest track and shows why he is the Punjabi Pop Prince.

The track is very urban inspired but still has those Indian sounds to it, which can make it appeal to music fans around the world. He has worked with Babbu for the lyrics, and Meet Shera for the music.

‘Yaar Superstaar’ is dedicated to friendship, and shows that even through highs and lows, friends will stick with each other no matter what. On his Instagram, Harrdy said: “Yaari te gaana. Throughout my journey so far, my friends have always been there with me. Friendship is a bond which is so pure and is family which we choose on our own.

Dedicating this song to all my Yaars who are my superstars. Jado vi eh Gaana sunda, I miss my friends who are not with me and now are in different parts of the world. Here’s Yaarr Superstaar for you.”

The video stars Harrdy himself, Manjot Singh and Varun Sharma where they show off their best dance moves.

Harrdy Sandhu is also set to make his Bollywood debut alongside Ranveer Singh in the cricket biopic ‘83’. The flick is set to release on 10th April 2020, where Harrdy will be playing the role of Madan Lal, who was an all rounder and took the most crucial wickets in the 83-world cup.

From In front of the mic 🎤 to in front of the camera🎥. Marking the start of a new chapter in my life where I’ll be getting an opportunity to relive my first dream – of playing cricket for the country. Posted @withrepost • @83thefilm Chak De Phatte! Punjabi Pop Sensation @harrdysandhu is ’83 World Cup Hero #MadanLal! #CastOf83 @ranveersingh @kabirkhankk @reliance.entertainment @mantenamadhu @vishnuinduri #Relive83 . . . . . . #HarrdySandhu #MadiPaji #83thefilm #Announcement #Cricket #Cricket🏏 #1983WorldCup #WorldCup #Pitch #RanveerSingh #KabirKhan #Bollywood #Film #Cinema #Movie