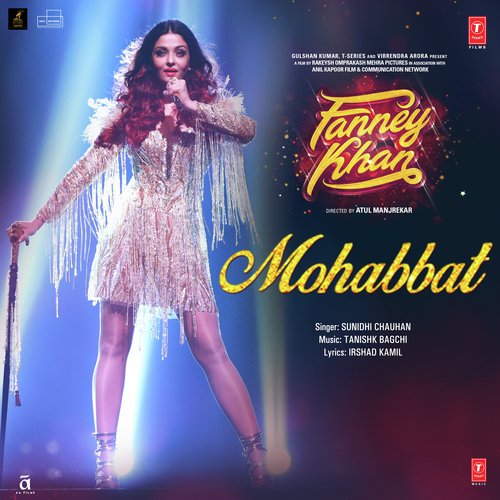 ‘Mohabbat’ is the first song to be released from the upcoming movie ‘Fanney Khan’ starring Anil Kapoor, Aishwarya Rai Bachchan and Rajkummar Rao.

The video opens with Aishwarya dazzling in an embellishment outfit with fiery red highlights in her hair, looking every inch as a pop star. This is a huge treat for fans, who have eagerly been waiting for the Bollywood actress to return to the big screen.

We have been hearing this particular song since the release of the trailer, and knew this would be Aishwarya’s introductory song in the film. It doesn’t fail to impress, and has caused a huge stir around the release of the musical movie.

‘Mohabbat’ has been sung by Sunidhi Chauhan, and her energetic vocals don’t fail to impress. She gives it a lot of character that compliments Aishwarya’s peppy performance. The choreography for the song has been made by American choreographer Frank Gatson Jr, who has worked with the likes of Beyonce, Jenifer Lopez and many others, to put together a perfect pop star dance. It’s not your typical Bollywood performance, but more girl power and glamorous, which the actress pulls off well.

A post shared by AishwaryaRaiBachchan (@aishwaryaraibachchan_arb) on Jul 11, 2018 at 6:50am PDT

Aishwarya, who plays Baby Singh in the movie, will instantly catch your attention from her perfect catwalk to her memorising eyes and dazzling outfits. After her movie, ‘Ae Dil Hai Mushkil’, fans are delighted to see the actress back on the big screen. The movie looks very promising as it follows the journey of a girl who wishes to be a pop star, and her father is on a mission to help his daughter.

Bhangra Priyanca Kumari - 27th September 2020
0
Jazzy B has rebooted a five-year-old song prescient to the protests in Punjab that oppose the recently passed Farm Bill introduced by Indian Parliament. Thousands...
© BritAsia TV 2020 All rights reserved. Made By Gloss