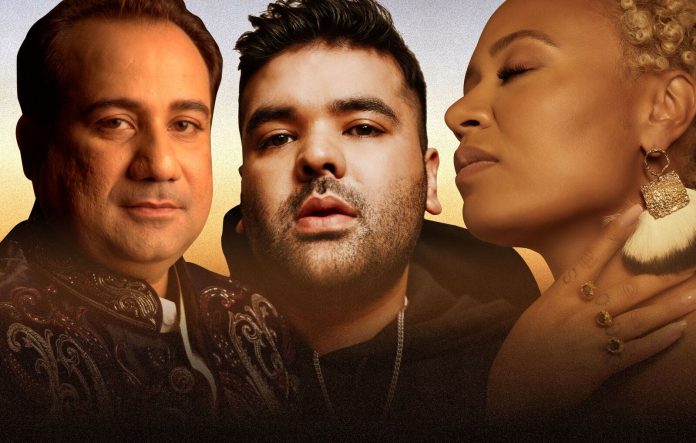 ‘Bungee Jumping’ is another stand out track from Naughty Boy, which will leave you in a trance whilst listening to the soothing song. The soft and angelic track includes a range of Pakistani soundscapes and influences, with warm watery textures, creating a haunting song that hums with raw emotion.

The concept originated after a game, that Naughty and Emeli played, where they attempted to write a song about the most random thing that came into their heads. After creating the concept, the acoustic guitar driven song was born. Emeli’s lyrics focus on taking risks in love, while Rahat’s lyrics are a meditation on the eternal power and commitment of love, echoing the devotional musical he is known and loved for.

Speaking about the track, Naughty Boy said, “This is what dreams are made of, especially for a producer, for someone who’s grown up with Pakistani music, with Qawwali music, with ghazals and with Western music as well.

It’s a dream come true for me to be able to bring this collaboration together…because my heart is in Pakistan, and here.”

Naughty also announced that he will be releasing his second album next year, to follow up the 2013’s acclaimed debut ‘Hotel Cabana’. He has been rumoured to have been in the studio with fellow British Asian producer Steel Banglez, Raye, Miguel, Bebe Rexha, Julia Michaels, Calum Scott & Mike Posner.