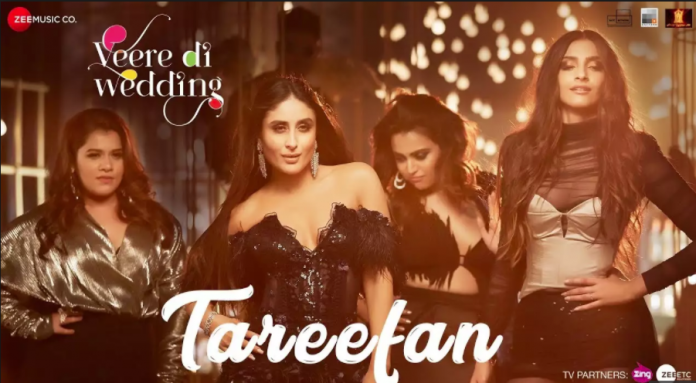 The song from Veere Di Wedding has been released titled ‘Tareefan’ which has been sung and rapped by Indian rapper Badshah.

The music video features Kareena Kapoor and Sonam Kapoor, who play the lead roles in the upcoming Bollywood movie.

We also get to hear Badshah sing but also features him rapping in the song as well. In the video for the club sounding song, we see the girls playing a role reversal and turn into female’s bosses.

Fans see Sonam, Kareena, Swara and Shikha lip syncing to his voice, and their dance moves sure set this song on fire. We see the ladies taking charge, and taking on the stereotypical role of males, and show scenes of themselves paying for the bill and driving around them.

The song has been composed and written by Qaran, and choreographed by Farah Khan who 150 Bollywood songs under her belt.

The movie isn’t your typical Bollywood movie, and has a lot of WTF moments with the definitely being one for the girls. It’s a movie that all girl friendship girls will be able to relate to and we’re sure they’ll be a lot of laughs along the way.

Check out Tareefan from the upcoming movie ‘Veere Di Wedding’ below.