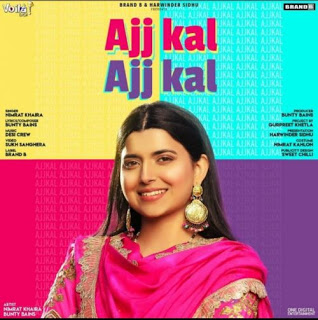 Nimrat Khaira has released her latest track, ‘Ajj Kal, Ajj Kal’ featuring Bunty Bains. The music has been produced by Desi Crew Mix, whilst Bunty Bains has written the lyrics.

Nimrat Khaira took to her Instagram to share a snippet of the video, with the caption: ‘Ajjkal Ajjkal out now ❤️ Checkout on youtube ..A simple sweet melody i hope tuhanu sab nu pasand aau 🌸’.

As an avid Tik Tok fan, Nimrat Khaira encouraged her fans to create their own Tik Tok’s to the song, after sharing a video of her lip-syncing to the lyric ‘Rehnde shookeena😊 #ajjkalajjkal’.

Check out the Official Music Video below: