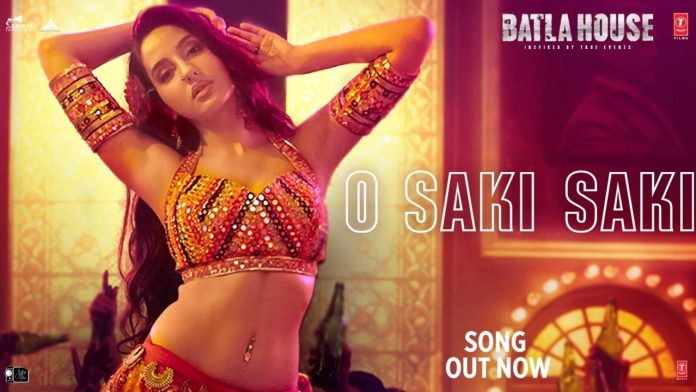 After the huge success of ‘Dilbar’, Nora Fatehi is setting the screen on fire once again with her Arabic inspired moves in the remake of ‘O Saki Saki’.

15 years after the release of ‘Saaki Saaki’ from the flick ‘Musafir’, the makers of the upcoming Bollywood film ‘Batla House’ have recreated the track.

This time, they have enlisted the help of dancing sensation Nora Fatehi to bring her sizzling dance moves to the next chart bursting track. The track has been recomposed by Tanishk Bagchi and has been sung by popular Bolllywood playback singer Neha Kakkar and Tulsi Kumar.

The teaser was released two days ago, which already reeled in a lot of the audience and it became one of the most awaited tracks of the year.

From the moment the song begins, your eyes will be fixated on Nora as she opens the visuals with a bang. We see her doing an array of dangerous dance moves including dancing with fire!

Speaking about the remake, Nora said: “Getting the opportunity to be able to perform on a song like ‘O Saki Saki’, which has been made on such an epic level by Tanishq, sung by Neha and Tulsi, is a dream. The way Tanishq has composed this song is out of this world and I knew visually, I’ll have to match up. I learnt to dance with fire fans for the first time within only 3 days, and I must say it was extremely challenging.

As the fire fans were heavy and dancing with fire is very risky, it was difficult to manoeuvre and dance with them effortlessly. Thankfully, I had the drive to do it because I wanted the audience to see me add something new to my dance. The best part is I am acting in the film Batla House. So, my character’s performance to the song in the film leads up to a very important sequence of events that carries the story forward. I am very grateful to Nikkhil Advani sir, Bhushan Kumar sir, John Abraham, T-series and Emmay Entertainment for giving me this opportunity.

As an artist, I always want to take it up another level, give something new to the audience and push myself further, Be it with my desi avatar or with the intense hook step in the video ‘O Saki Saki’, I am hoping I am able to achieve that and I’m looking forward to the audience to see my performance throughout the film.”

News Priyanca Kumari - 27th October 2020
0
The All Party Parliamentary Group (APPG) have published the latest report into Anti-Sikh hate crimes this October. There are more than 150 constituencies across the...
© BritAsia TV 2020 All rights reserved. Made By Gloss