Barack Obama the current US president has stated in a podcast interview with ‘The Axe Files’ the he cried during his send off dinner with senior staff members.

Obama said he started crying as soon as the dinner function started. “We had our senior staff dinner… I got through about four minutes of the thing and started getting the hanky out.” He went on to state it felt like “the band were breaking up.” 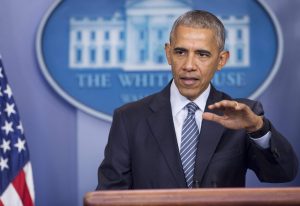 The president also stated in the interview that if he had the chance to be re-elected he would. The United States Constitution states that a President can only hold the position for two terms. Obama also said given the opportunity to run for president again he would feel confident US citizens would vote for him and support him. “I am confident in this vision because I’m confident that if I had run again and articulated it, I think I could’ve mobilized a majority of the American people to rally behind it.”