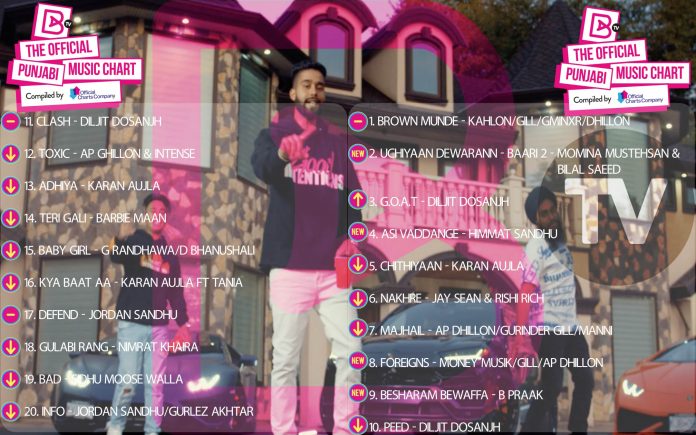 Making their way into the top three this week with a new entry, is Uchiyaan Dewaraan (Baari 2) by Bilal Saeed and Momina Mustehsan at number two. And G.O.A.T by Diljit Dosanjh creeping back in to the charts at number three.

AP Dhillon et al however, are holding on tight to the top spot irrespective of new entires with their September smash hit, Brown Munde.

When Dhillon posted a snippet on his social media platforms in September, it was evident from the caption that they’d be ‘breaking boundaries’ and indeed breaking charts too.

Monopolising the Punjabi Music Chart week after week, his declaration is justified.

But this week we’ll shine the spotlight on the mesmerising music video for #UchiyaanDewaraan by Bilal Saeed and Momina Mustehsan. It is written, composed & directed by Bilal Saeed with special thanks to Rahim Pardesi and Hamid Ali Naqeebi.