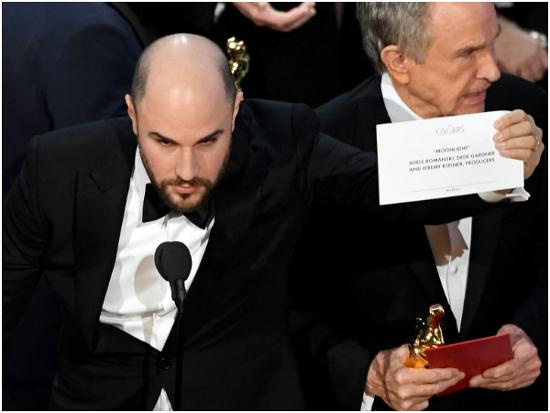 Could this have been the biggest mistake ever to happen at the Oscars?

Last night we saw Faye Dunaway and Warren Beatty wrongly announce La La Land as the winner for Best Picture instead of Moonlight.

The mistake was announced half way through the La La Land producer’s speeches, producer Jordan Horowitz interrupted and announced “This is not a joke. Moonlight is best picture” and showed the card to the camera. Many are wondering how a mistake could happen at an event like the Oscars, but it’s a lot easier than you think. For each category there are two sets of cards, in case anything happens to the other set. Warren Beatty was given the other copy of the card for Best Actress saying “Emma Stone, La La Land”. Beatty took the microphone to explain his reaction, “I want to tell you what happened. I opened the envelope and it said ‘Emma Stone, La La Land’, and that is why I took such a long look at Faye and at you.” The firm who’s responsibility for the ballots has since apologised “We sincerely apologise to Moonlight, La La Land, Warren Beatty, Faye Dunaway, and Oscar viewers for the error that was made during the award announcement for best picture (…) We are currently investigating how this could have happened, and deeply regret that this occurred.” Jimmy Kimmel could only try to see the humour in the whole situation “Personally I blame Steve Harvey for this”, a reference to Steve Harvey’s mistake at the Miss Universe 2015.

Who do you think should have won the award? Let us know your thoughts. #BritAsiaTV