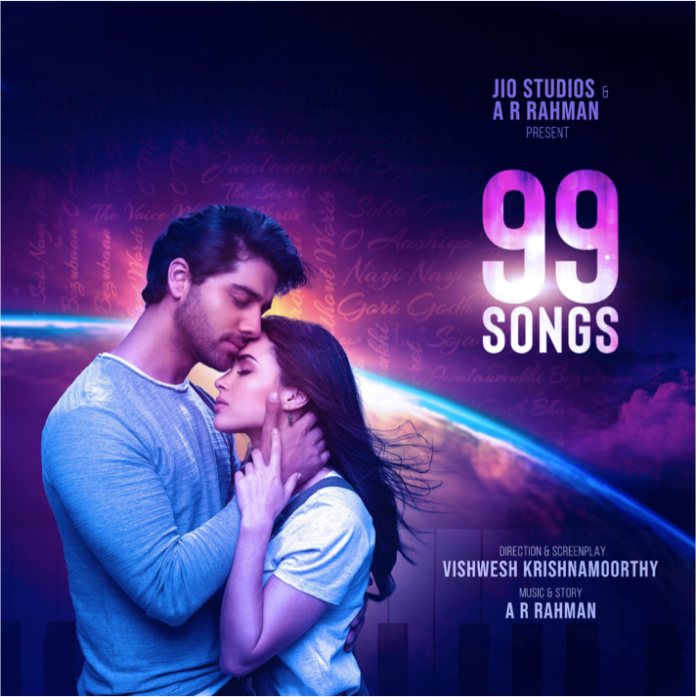 A.R Rahman’s soundtrack for 99 Songs which features musical icons such as Arijit Singh, Shreya Ghoshal and Alka Yagnik, together with budding musical talents, is available now in Hindi, Telegu and Tamil.

Oscar and Grammy Award-winning composer A.R. Rahman marks a filmmaking first as a producer and co-writer with the highly anticipated movie 99 Songs — and perhaps the music maestro’s most ambitious storytelling project yet.

The film charts a passionate love story that’s tested by a musical quest. A romantic musical, 99 Songs is set to release in theatres on 16 April 2021 in Hindi, Tamil and Telugu. The film’s soundtrack is also available the same three languages and the lyrics have been penned by Navneet Virk.

Composed by Rahman, the album has already resonated with people across India and the globe. The 14-track album features established music luminaries such as Arijit Singh, Shreya Ghoshal and Alka Yagnik as well as budding musical talents such as Armaan Malik, Shashwat Singh, Shashaa Tirupati, Poorvi Koutish and Sarthak Kalyani, among others.

Songs such as O Aashiqa, Jwalamukhi and Teri Nazar have captured the imagination of the world while Rahman’s magnificent solo outing on the album; The Oracle is a fluid piano-led revelation. Rahman also brings in notes of jazz on the soundtrack through the sultry ballad Soja Soja while indulging in celebration through the Punjabi hip-hop song Veere Kadh De. Traversing a range of genres from rock and pop to ambient and beyond, Rahman charts a magical musical journey through the soundtrack.

Speaking about his filmmaking debut, Rahman revealed that 99 Songs is a holistic music story where the narrative comes full circle. The film follows the journey of an aspiring musician Jay (played by debutant Ehan Bhat) who discovers his true sound and purpose in the course of the film. In the tradition of true method acting, Bhat even received music training at the KM Music Conservatory, Rahman’s music school in Chennai. The actor also spent four weeks in L.A., honing his acting skills under the guidance of some of the best performance coaches in the business.

As 99 Songs releases in three languages, Rahman stayed true to the script and retained the essence of the film in every translation. Both the soundtrack and the film will reflect the story’s heart and authenticity.

Speaking about the film and album, Rahman said, “I thought that if I ever tap into storytelling, let it be through music. Our culture is so beautiful; we must embrace the good things and reflect them in our music. 99 Songs spearheads our creative originality.”

Talking about his inspiration behind the film, Rahman said, “I wanted to be imaginative and do something I believed in.” He added that Indian films and music have undergone tremendous transformation in the past five years and new age India wants to be more worldly: “This movie has heart and soul. The film’s narrative and the music are like the seasons.” The film follows a very creative arc, with its highs and lows mirrored by the music of the film.

The soundtrack is available to listen now in Hindi, Telegu or Tamil.

99 Songs is directed by Vishwesh Krishnamoorthy and introduces Ehan Bhat and Edilsy Vargas in the lead roles. Aditya Seal, Lisa Ray and Manisha Koirala too feature in the film. 99 Songs is presented by Jio Studios and produced by A.R. Rahman’s production company YM Movies. The film is co-produced by Ideal Entertainment.