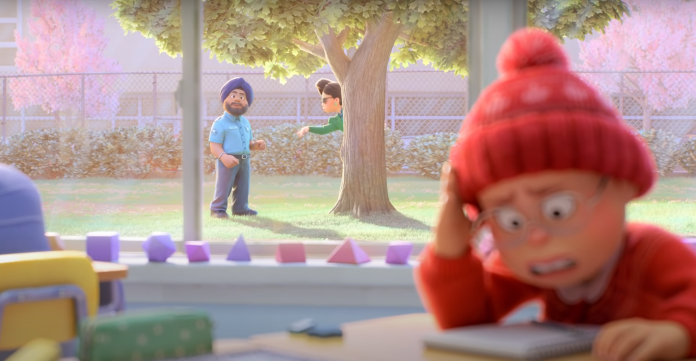 Disney and Pixar have shared the teaser trailer for their upcoming feature film Turning Red, which features a Sikh character for the first time.

The character, complete with a blue turban and kara (steel bangle) is a Studio first in the history of Pixar films, but some online reactions consider the depiction stereotypical.

Turning Red is directed by Domee Shi, who won an Oscar® for her 2018 short film, Bao. Young actress Rosalie Chiang lends her voice to Mei Lee, a 13-year-old who suddenly “poofs” into a giant red panda when she gets too excited which is almost always. Sandra Oh voices Mei Lee’s protective, if not slightly overbearing mother, Ming, who is never far from her daughter—an unfortunate reality for the teenager.

In the trailer, a Sikh security guard can be seen comically placating Mei Lee’s mother outside her classroom window, unauthorised on the school grounds. Though muffled through the window, the Sikh guard has a few lines which can be heard in an assumed Canadian accent as the film is set in Toronto.

Furthermore, to ensure diversity among Lee’s classmates, the teaser also shows a young girl in a purple headscarf together with Black children. From the teaser, it is clear from the outset that the movie promises to feature characters from different cultures.

While it is the first time the animation studio has portrayed a Sikh character, some users did not hesitate to express disappointment in the comments section on Instagram — with the hope that minority ethnic groups would harness bigger roles in future films.