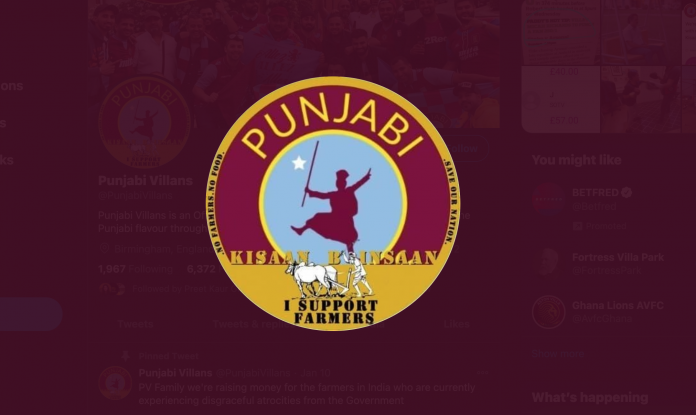 Punjabi Villans and Midland Langar Seva Society have raised over £10,000 to provide resources and clothing for the Kisaan 2021 in Dehli, India.

After going live with the international crowdfunding campaign on 10 Jan, nearly 200 donations were made and in just five days the charity reached their target.

On 10 Jan they took to Twitter to announce the crowdfund: “PV Family we’re raising money for the farmers in India who are currently experiencing disgraceful atrocities from the Government The guys on the front line need basic supplies, which ur donation could help with However big or small, it’s all a blessing.”

Days later, the team thanked supporters on social media for their donations and shared a picture of their achieved target: “And in just 5 days we have managed to raise and hit the target of £10,000! Thank you is not enough to gratitude for all those that helped, shared, supported and contributed. May you all be blessed. Even during these dark times. We can all bridge together @MidlandLangar.”

Thank you is not enough to gratitude for all those that helped, shared, supported and contributed.

Even during these dark times. We can all bridge together @MidlandLangar pic.twitter.com/i410rb8tDs

The donations have yielded an inventory of provisions including from clothes and shoes to hygiene supplies and electrical equipment.

Guri Nandra from Punjabi Villans told BATV why it was important to help MLSS. He said: “We decided to launch the campaigned after we saw Bhai Randhir Singh from MLSS posting on social media asking for donations for basic supplies for the front line Kisaan protestors. Supplies were basic, such as warm clothing, footwear and sleeping equipment. You generally do not think about these types of hardships the protestors go through, it’s easy to forget that they are there for weeks. We have wanted to help but didn’t know how to until we saw the information sent by Bhai Randhir Singh, so as soon as we knew that there was a charity we knew and trusted we set out to raise what we could.”

On what this means for Kisaan 2021, he added: “It means the protestors who are fighting for lively hood of their family and the rest of Punjabi can have the bare amenities of life: Food, shelter water, clothing, sanitation and healthcare. It means we, their family on the other side of the world have a chance to help them, it’s a chance for them to feel the love we have for our people in India even though we’re not physically there it’s important that, at this time, we show we are all one.”

Nandra added people can show support by educating themselves on the current issue, familiarising themselves with what is happening in Punjab.

He said people can help by donating to charities like MLSS, where they money is used for the front line Kisaans and raise awareness to those that are unfamiliar with the latest developments.

Nandra concluded: “We would like to take this opportunity to thank all those that donated. We raised £10,000 in 5 days which has already been sent to MLSS who are in Delhi at the moment and using the funds to provide essential amenities to the sangat.”