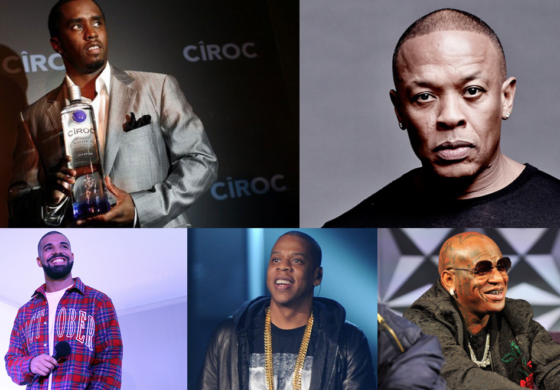 Forbes Magazine have ranked the richest artists in Hip-Hop. The magazine produced the list by taking into account past earnings and financial documents, valuing current holdings and talking to analysts, attorneys and managers. You can see the results below:

Sean Combs aka ‘Diddy/P.Diddy’ has been named the world’s wealthiest hip-hop artist according to Forbes’ magazine. Diddy maintains the number one spot with an estimated net worth of $820 million, which is thought to be a result of his lucrative deals with Ciroc Vodka and his Sean John clothing line.

Second place goes to Jay-Z, with an estimated net worth of $810 million. Partly due to a huge $200 million investment into Jay’s music streaming service ‘Tidal.’

Third place was awarded to Dr.Dre, whose estimated net worth totals $740 million. A large stake of Dre’s earnings comes from his headphones and speakers company ‘Beats by Dr.Dre.’

Drake, founder of the brand OVO,  takes fifth place with an estimated net worth of $90 million.

Did this match the list in your head? Let us know your thoughts. #BritAsiaTV