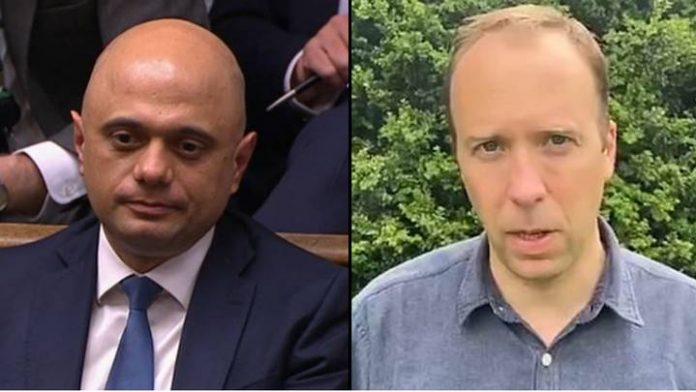 Sajid Javid has been appointed the new Health Secretary after Matt Hancock stepped down from his cabinet post on Saturday.

Former chancellor and home secretary Mr Javid said he was “honoured” to be appointed to the role – just 90 minutes after Downing Street announced Mr Hancock stepped down on Saturday.

The former Health Secretary resigned on Saturday evening for breaching social distancing guidelines; after CCTV images and a video of Hancock kissing aide and former lobbyist Gina Coladangelo in his departmental office emerged.

The footage, published by the Sun newspaper last week has now instigated an investigation into a government security breach.

Meanwhile, new Health Secratary, Mr Javid not only enters the coronavirus arena but will contend with NHS reforms, battles over pay the appointment of a new NHS chief executive, and a backlog for treatments.

However, he remains optimistic in the fight against the pandemic and looks forward to serving his country from his cabinet once more.

Making the announcement on social media, Mr Javid tweeted: “Honoured to have been asked to serve as Secretary of State for Health and Social Care at this critical time. I look forward to contributing to our fight against the pandemic, and serving my country from the Cabinet once again.”

Honoured to have been asked to serve as Secretary of State for Health and Social Care at this critical time.

I look forward to contributing to our fight against the pandemic, and serving my country from the Cabinet once again.

In his letter of resignation, Mr Hancock said: “The last thing I would want is for my private life to distract attention from the single-minded focus that is leading us out of this crisis.

“I want to reiterate my apology for breaking the guidance, and apologise to my family and loved ones for putting them through this. I also need (to) be with my children at this time.”

Responding to Mr Hancock’s resignation, Prime Minister Boris Johnson wrote: “You should leave office very proud of what you have achieved – not just in tackling the pandemic, but even before COVID-19 struck us.”

He added: “You should be immensely proud of your service. I am grateful for your support and believe that your contribution to public service is far from over.”

Mr Johnson had refused to sack his health secretary and his spokesman said the PM considered the matter “closed” following Mr Hancock’s apology. But Mr Hancock submitted his letter of resignation on Saturday.