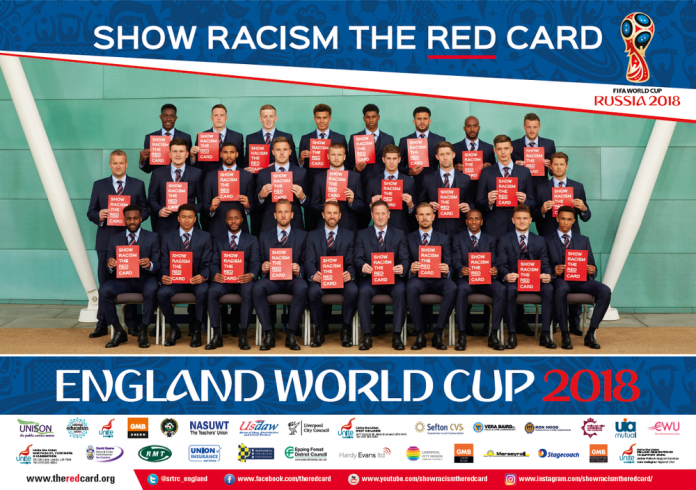 Before setting off to Russia for the World Cup, Gareth Southgate and the England football team released a poster with ‘Show Racism the Red Card’, a UK-based anti-racism educational charity. This campaign seems to have increased patriotic sentiments for many British Asians supporting England in the World Cup this year.

The England manager previously spoke out against the concerns about England players and fans suffering racist abuse from the hosts of the World Cup, Russia: “We keep pointing the finger at Russia on racism, but we’ve got to get our own house in order.” After seeing slanders on social media platforms against the England’s Under-17 World cup winning squad, he explained: “The comments about that team were disgusting. They’re part of our England family. To see them abused in that way is absolutely disgusting.”

Acting on these concerns, Southgate’s support for the ‘Show Racism the Red Card’ campaign evidences him using his platform to deliver the anti-racism message to young people and adults across the country.

Given the multiple racist undertones in the UK press against Raheem Sterling, this campaign promoting inclusivity and unity was a welcome relief. MPs also gathered to take part in the wider campaign in June. Holding up the charity’s red cards and the England team poster, MPs from across the house promoted the annual fundraising day ‘Wear Red Day 2018’, taking place in England and Wales in October 2019. Tanmanjeet Singh Dhesi tweeted from the event: “Proud to back the @SRTRC_Eng campaign, working to educate children and young people and challenging racism across the UK.”

Football has always been a pillar of British Asian culture, with fans across the country gathering for the England League games. Though support for England was guaranteed, the campaign was received well by many fans across the world. Even Indian fans said they were “gutted” that England did not reach the finals.

The atmosphere around the England team was supportive and encouraging, especially as the team’s potential became evident as the tournament progressed. The support seems to have reached its peak in a viral video of an Indian wedding, where the groom, Varun, did a toast to “Gareth Southgate and the England football team for reaching the World Cup semi-finals” against the backdrop of “Three Lions (Football’s Coming Home)”.

Football may not have come home, but the sportsmanship of the England team made people proud to call England home.

With England in the semi's, we take a look back at some of the celebrations from across the country 🎉#WorldCup #ThreeLions #itsComingHome